I visited West Louisville Elementary (about 2 hours west) just outside of Owensboro on April 9th. For lunch, I decided to drive the 10 miles down the road to the famous Moonlite BBQ. Ronnie has talked about it since I started at the Museum. I told the ladies in the office where I was headed and they warned me that I would need a nap when I came back. They were right! I felt like I had just eaten Thanksgiving Dinner. What do they put in that BBQ?? It’s a good thing I only had a 30 minute lunch break. Unlimited time at a delicious BBQ buffet equals not fitting into a Derby dress in three weeks. 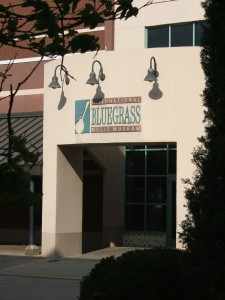 After school, I had some free time so I decided to head downtown and check out a few of Owensboro’s cultural attractions. First stop, the International Bluegrass Music Museum. I walked in right as he was closing down. Since I was already there, he let me come into the lobby and check it out. My Kentucky Derby Museum shirt sparked a conversation, and he mentioned that they do similar outreach programs in the local schools. We talked briefly about the importance of preserving history and educating kids about their state’s legacy. Before I left, he handed me a really cool music poster and told me about their annual Summer Bluegrass Festival ROMP at Yellow Creek Park. This year’s lineup includes Merle Haggard, Del McCoury Band, Punch Brothers, Carolina Chocolate Drops, SteelDrivers, Leftover Salmon, Town Mountain and Della Mae to name a few. 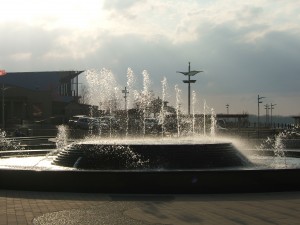 Afterward, I headed down to the waterfront since the other museums were closing for the day as well. Owensboro has such an impressive park. It even has music piped throughout it. A MASSIVE playground, to the right off in the distance. Complete with dancing water fountains.

The next day, I visited Tamarack Elementary in town. The KDM Outreach program has been to two schools, East View and Tamarack, every year since the program was created. The kids were great. I even had a student that saw me at Cub Run earlier in the year before she moved.   After school, I went back to the Bluegrass Museum because I had to experience it before heading back to Louisville, and I’m so glad I did. Informative, interesting and hilarious- there was an entire wall of Ban-Jokes (Jokes about Banjos). My mind was blown when I learned that it was Bill Monroe who had started the Bean Blossom Bluegrass Festival in Brown County, Indiana (not too far from my hometown of Seymour), which is the oldest, continuously running bluegrass festival in the world! How about that Hoosiers??