Outreach is over until the fall. This spring semester I traveled about 8,800 miles, visited 52 schools, and saw close to 18,000 students- and I remember ALL of their names.

Just as I was looking forward to slowing down and handing in the Prius keys for the summer, I received two packages of thank you letters that made me realize how much I was going to miss being on the road.

The Monday after Derby, I made two hour drive south to Mt. Vernon Elementary, right down the road from Renfro Valley. During Mathin’ Around the Track, we had some “technical difficulties” with the dry erase board as it slowly broke down. I had to stop the program and hold it together while a teacher left to go find the janitor. In the thank you letters, about one third of the drawings had this giant board in the background. I must have really made an impression. 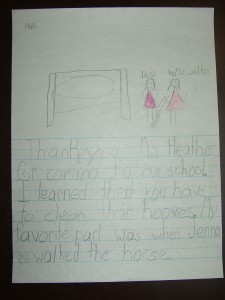 The big oval is the Churchill Downs racetrack. The boss is the trainer of Team Thoroughbred and the horse walker does what is referred to as hot walking. Her job in the barn is to calm down the horse after workouts.

This student even drew the safety vest, goggles and helmet on the exercise rider! (The one in the middle) I bring all of the equipment, dress kids up and have students demonstrate the various jobs in the barn that all of these people do to take care of a racehorse. Each job has a math problem that they have to solve. 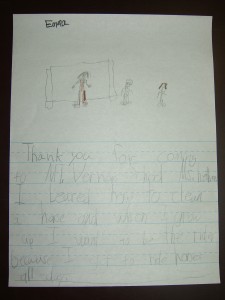 The next day, I visited the 1st and 2nd grade classes at Woodland Elementary in Radcliff for Creating Traditions. One girl had so much fun that she even included me into the CD Grandstands along with her and her teacher.

At the end of each program I try to leave time for questions. There are the general ones, repeats, etc, but a few have really stumped me. Here is a recap of some of the best questions met with, “Hmmm, … I’ll look that up. Next question.”

How many different breeds of horses are there? “A lot. Next Question.” I had to search a while to find this answer. I discovered that there are over 350 breeds that are broken down into four categories- Light Horses, Heavy Horses, Ponies and Feral Horses. Some of the most popular breeds are detailed here.

Do they brush the horses' teeth? Well yes and no. They don’t have a giant toothbrush lined with Colgate, but horses have dentists just like we do.

How many commemorative glasses were sold? "Several. Next Question." First off, congratulations on knowing the word “commemorative” elementary student. Second, after some research (thank you Katie, Te'Airra, Barry, Karen and Ronnie) we know that the Kentucky Derby Museum has sold about 7,500 from the 2012 Derby to date. Churchill Downs, however, sold about 150,000 glasses on Derby weekend alone. The 138th Running of the Kentucky Derby on May 5th, 2012 drew a record setting 165,307 spectators to Churchill Downs. The combined Oaks (Friday) and Derby (Saturday) attendance was another record of 277,859 people. You may also be interest to know that they sold:

How do horses get their names? It could be from their pedigree by combining their sire (dad) and dam (mom) to create a new name or by a funny story that relates back to the owners.   The 2013 Derby horses had an interesting mix of the two. But they all have to abide by the official rules set forth by the Jockey’s Club.

Who is the oldest living Derby Winner? That would be Sea Hero, our Virginia born 1993 Champion. He’s now 23 years old and living in Turkey.   Who was the largest horse to ever win It's hard to know for sure, especially going all the way back to 1875, but it's probably Winning Colors, our 1988 Champ. She was the last filly to win. Her trainer, D. Wayne Lukas, said that all of the boys were afraid to pass her on the track. She was ridden by Gary Stevens (who rode Oxbow in this year’s Derby) and earned a $611,200 check for her owner in the Winners Circle.

Who was the smallest horse to ever win? Probably Clyde Van Dusen (Dew-sen). The 1929 winner was named after his trainer and ridden by jockey Linus “Pony” McAtee, who actually needed a pep talk to mount the Thoroughbred. When McAtee first laid eyes on him, he was convinced they were playing a trick on him with a pony. Clyde Van Dusen's small stature proved to be misleading, and he crossed the finish line first to net $53,950.

What did Aristides win? This question was asked by a teacher. Aristides won the very first Kentucky Derby on May 17, 1875. He didn’t receive any roses or a trophy (you’ll find out why below) but he did take home $2850. Second place was awarded $200.

Why do they give so many roses? Is it a real blanket? Will it keep you warm? Do the thorns poke the horse? It's a garland (just for decoration) with an interesting history.

Do they really sew the garland of roses together? Do they use a sewing machine? Each rose has a vile of water to keep it fresh and they are “sewn” into the backing material.

I have had two kids from opposite ends of the state ask about the trophy superstition. “Is it true they turned the horseshoe on the trophy upside down because all of the horses who won had back luck after the Derby and didn’t win any more races?” Well, that can’t be true, because we’ve had 11 go on to win the Preakness and then the Belmont to become Triple Crown Winners. But they were right about a superstition linked to our trophy. According to our Winner’s Circle Exhibit on the first floor-

In the early years, Derby winners received prize money, and sometimes a trophy or buffet service. But in 1924, the “Golden Anniversary Trophy” was first awarded during the Winners Circle ceremony to Mrs. Rosa Hoots and her colt Black Gold. The design has only been changed once since then. In 1999, the horseshoe on the front was flipped to face upside down. According to racing superstition, if a horseshoe faces down all the luck will run out.

A VERY interesting side note - Mrs. Hoots was awarded the solid gold trophy to celebrate the 50th Anniversary of the Kentucky Derby. In the 1930s, it was stolen from her home during a break in and never recovered. There are around five Derby trophies that are still unaccounted for. [Thank you Mr. Goodlett, Curator of Collections at the Kentucky Derby Museum.]

Great job students! If these questions are any indication of what I'll be asked next year, I'm glad I have an entire summer to research and prepare.  Thanks for reading! I'll return this fall with more stories about "sharing the fun of the Kentucky Derby experience" with students all over this great state.