Churchill and the Great Flood

During the month of January 1937, it rained. And rained. And rained. The lower Ohio River Valley received over 15 inches of rain in 12 days. The river—which generally spans a single mile in its widest sections—had ballooned to over 20 miles wide by the beginning of February. At the flood’s crest, 90% of the city of Clarksville, Indiana was underwater. Nearly 70% of Louisville, Kentucky felt the effects. Particularly affected were river communities like Shippingport and Portland in the West End and The Point downtown. Few neighborhoods, including those a considerable distance from the waterfront, escaped the rising river. Many never fully recovered. 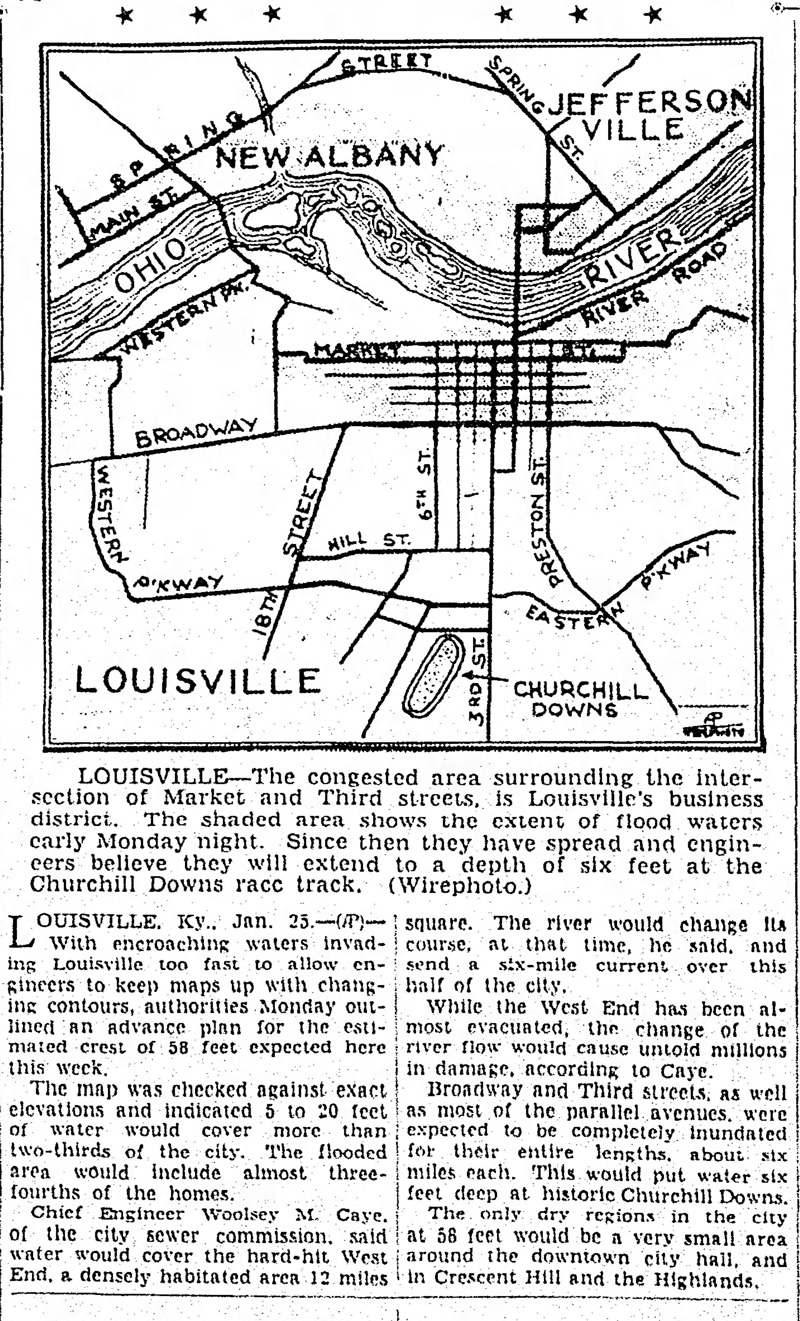 [January 26, 1937, The Daily Oklahoman map of Louisville and Southern Indiana]

Churchill Downs president Matt Winn initially thought the track would avoid flood damage. Sitting 5.6 miles from the river, officials felt confident that the property be spared, and they even offered its spacious infield and grounds to the American Legion for staging flood relief efforts. But unfortunately, Churchill Downs—like many Louisvillians—had underestimated how far the waters would reach; the same day papers announced Winn’s benevolent plan to make Churchill a flood relief headquarters, the river crested at just over 51 feet. 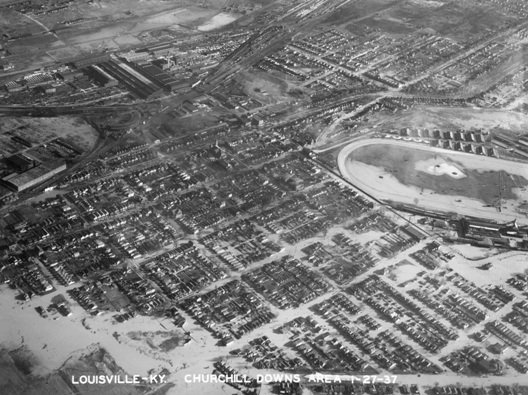 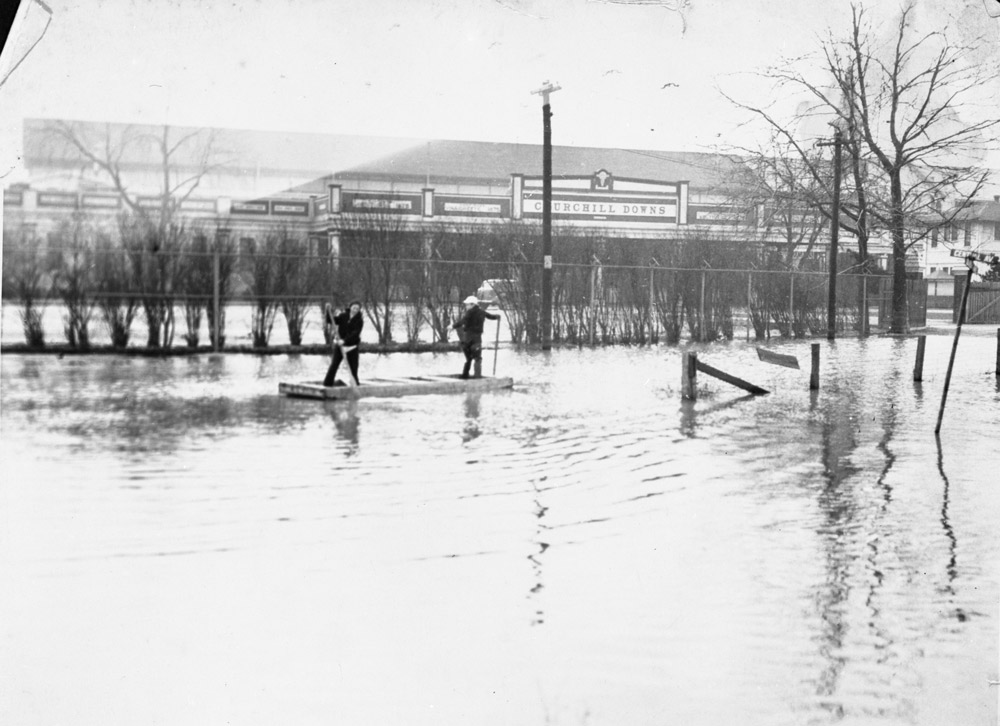 By February 4th, the famous track sat under 6 feet of water, and for the first time in history, people wondered if Louisville’s famous Kentucky Derby would run. Hell bent on preserving the tradition, other tracks in the United States wrote to Matt Winn offering to host the iconic race. “In the event that floods may prevent Churchill Downs being made ready for the Kentucky Derby please consider Narragansett Park at your disposal for the 1937 running of this historic race,” wrote the president of the Rhode Island track, Walter E. O’Hara, in a telegram.

Fortunately, the water ended up receding fairly quickly at Churchill Downs, only causing about $5,000 of damage overall. The track superintendent and his crew kicked into high gear rebuilding the dirt track and repairing buildings that had been affected. The only significant delay caused by the flood was the application process for Derby entrants. Matt Winn extended deadlines three weeks “to make sure no owner failed to get in his nomination.” 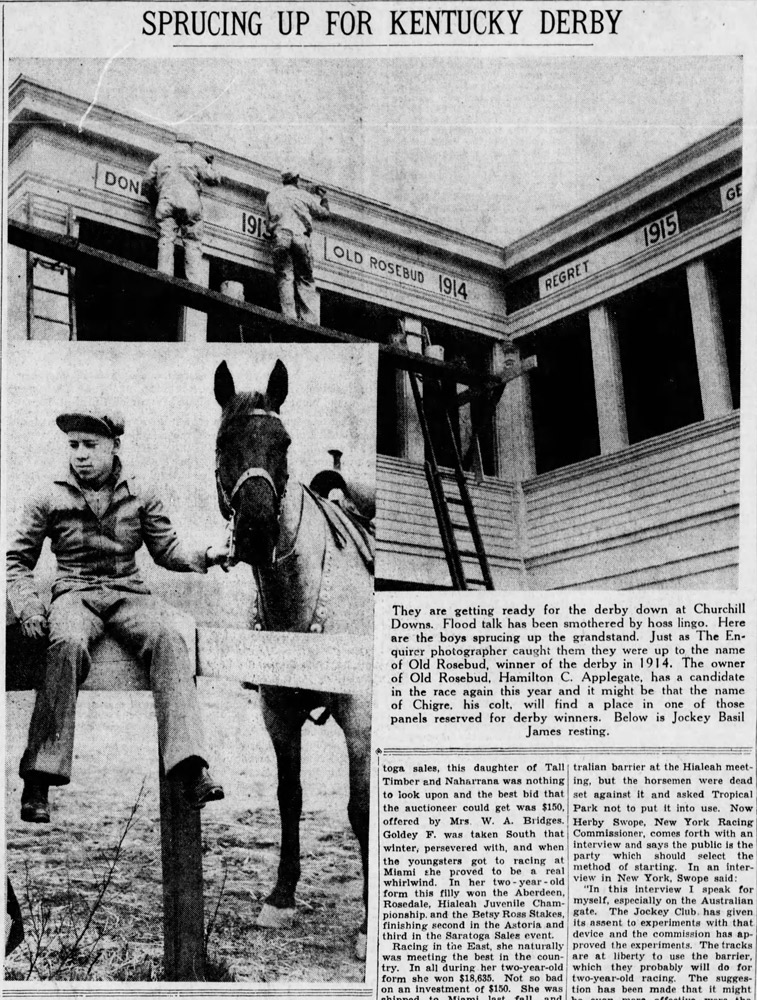 [April 11, 1937, The Cincinnati Inquirer clip “Sprucing Up for the Kentucky Derby”]

“Louisville has just gone through the worst flood in its history, but it will take many times more than that to in any way keep the Kentucky Derby scheduled for May 8 from being the best in Derby history. The water has departed. We are now cleaning up and we are going to show our visitors the old hospitality, the real Kentucky Derby spirit, is still here and we shall be prepared to take care of them in splendid style.”

The Associated Press was equally poetic, reporting, “Historic Churchill Downs whose spire-topped plant jutted up forlornly from flood waters less than three months ago shone in fresh spring colors today for the opening of 19 days of thoroughbred horse racing.” On May 7th, another columnist wrote, “Churchill Downs will typify the amazing recuperative powers of the American people. Fine clothes, fine thoroughbreds, instead of drenched rags and bread lines.” Louisville was counting on the Kentucky Derby to be a beacon in what had been a very dark Spring.

One of the great privileges of museum work is to preserve and share great stories like this through physical objects. In 2019, Joyce Christopher Britton and her siblings gifted us a remarkable artifact that will help the Kentucky Derby Museum interpret and celebrate Churchill’s recovery after one of the most devastating floods in American history: a massive 8 x 10’ flag that purportedly flew over the track while the 1937 flood raged over the Ohio Valley. 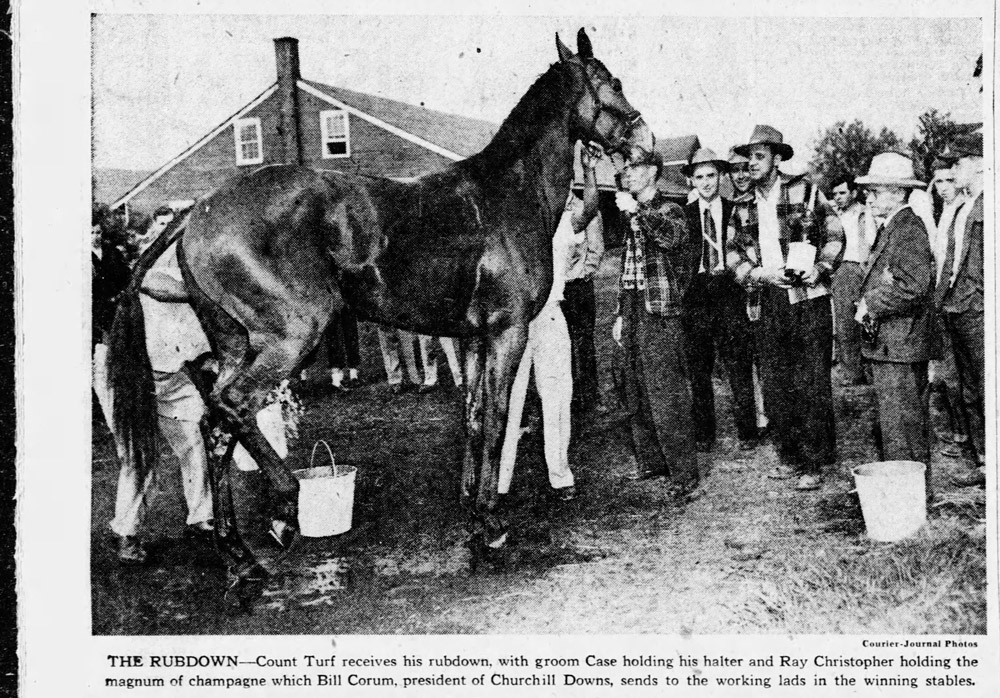 [May 6, 1951, The Courier Journal clipping of Ray Christopher with Count Turf]

The flag had come to them from their grandfather, Ray Ross Christopher, who worked at Churchill Downs for 29 years. At the time of the flood, Christopher was the Stable Manager and Assistant to the Superintendent at the time, Tom Young. His job would have entailed maintaining the Churchill property from the backside to the grandstand fence, including the beautification and care for the infield. Family lore held that during the flood renovations leading up to the 1937 Kentucky Derby, Ray Ross Christopher saved the old flag as a way to remember the historic year the Kentucky Derby could have been cancelled due to a weather event, but wasn’t.

While we may never be able to fully authenticate the flag’s original location or its exact date, its size suggests to us that it would have likely been flown from the gigantic flag pole that has stood in the infield throughout the 1930s and 40s. We are honored to continue to research its history and to preserve the story it tells of the Kentucky Derby and resilience. Enjoy this gallery showing images of the flagpole’s location in 1936 and 1937, and some photos of us documenting the condition and size of this remarkable flag. 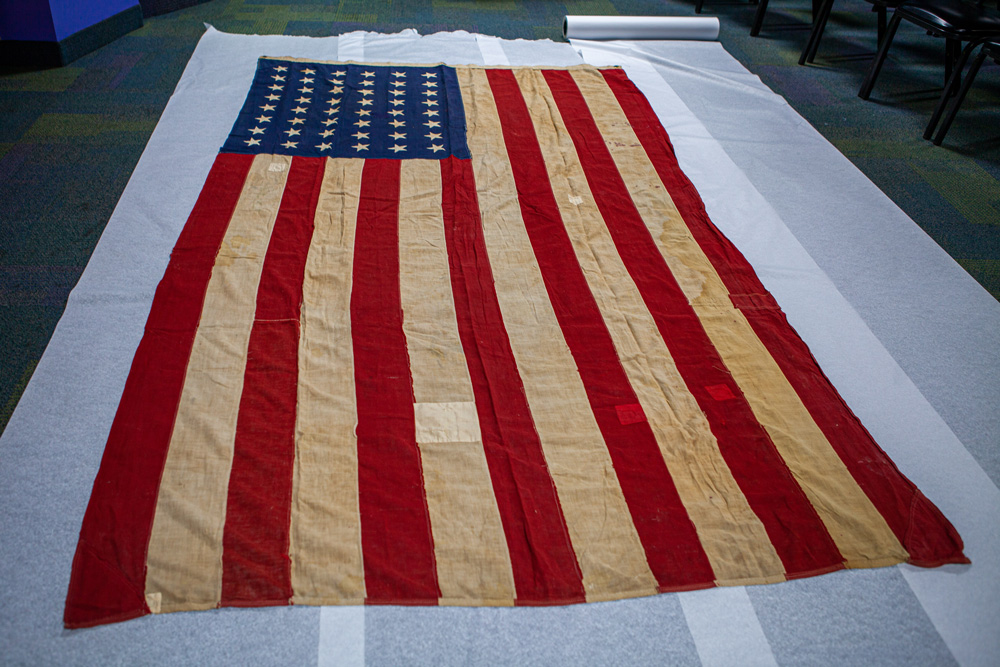 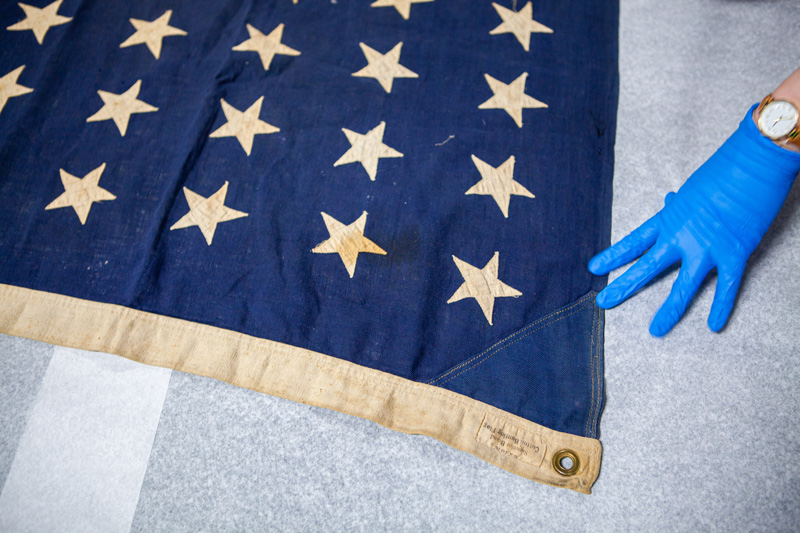