LOUISVILLE, KY. – The Kentucky Derby Museum’s new exhibit “AMERICAN PHAROAH”, celebrating the career and legacy of the 2015 Triple Crown winner, is now open to the public.

Following a special ceremony in the Museum’s Great Hall, all of the horse’s winning connections, including trainer Bob Baffert, his wife, Jill, Owners Ahmed and Justin Zayat of Zayat Stables and Jockey Victor Espinoza, officially opened the exhibit by releasing a giant balloon and fabric swag draped in turquoise and yellow, the colors of American Pharoah’s iconic silks. 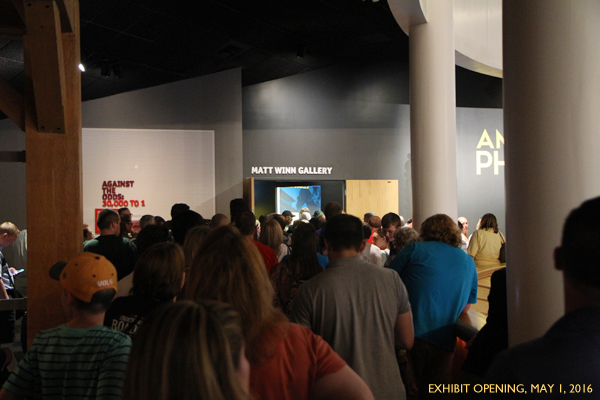 The exhibit heralds the excitement and intrigue American Pharoah brought to Thoroughbred racing with his historic Triple Crown campaign and beyond. Dubbed “the horse of a lifetime”, the new “AMERICAN PHAROAH” exhibit takes an in-depth look at the champion himself throughout his successful racing career. The exhibit shows what American Pharoah has meant to the public, from die-hard horseracing fans, to those with a renewed interest in the sport and brand-new fans all over the world.

Thanks to the generosity of the Zayat Family, American Pharoah’s Kentucky Derby, Preakness Stakes, Belmont Stakes and Triple Crown trophies will be displayed together for the first-time ever within the exhibit.

Many never-seen-before artifacts and personal mementos from each of the winning connections will also be displayed, including items from Baffert’s brief career as a jockey, Espinoza’s costume from his appearance on Dancing with the Stars and racing equipment American Pharoah used during his career. The exhibit will also highlight exclusive interviews with Ahmed Zayat, Justin Zayat, Baffert and Espinoza with interactive touch-screen displays.

“There hasn’t been a Triple Crown winner since the Kentucky Derby Museum opened its doors in 1985. We are thrilled to celebrate American Pharoah and the world-wide enthusiasm his career brought to the Thoroughbred racing industry,” said Patrick Armstrong, President of the Kentucky Derby Museum. “We thank Victor Espinoza, the Bafferts and the Zayats for their generosity and time in helping create this exhibit.”

AMERICAN PHAROAH, which will run through December 2016, is included with general admission to the Museum.