For those of you who thought fashion was just about the clothes we put on, think again. The history of fashion is the history of people: how we relate to each other, what our customs and values reveal about us, who we are. As fashion guru Coco Chanel once said:

“Fashion is not something that exists in dresses only. Fashion is in the sky, in the street, fashion has to do with ideas, the way we live, what is happening.”

Outlandish designs and dressing to the nines is synonymous with the Kentucky Derby. In 1906, the Courier-Journal reported, “Everything goes at the races!” From the earliest days—when a beautiful hat and dress was always a la mode, Derby or no Derby—to today, when getting dressed up and wearing a hat is generally saved for a few special occasions, racing fans have always been the best dressed when they watch the Run for the Roses.

The Derby’s founder, Col. Meriwether Lewis Clark, Jr., visited England and France in 1872 to observe the European racing customs and operations. He and his wife, Mary, were extremely impressed with the elegance, opulence, and history of the overseas tracks.

Returning home, Clark created a suite of stakes races for his newly-formed Louisville Jockey Club, located in the south end of the city at the corner of 4th and Central, where Churchill Downs still sits. Two of the special races created for opening day, May 17, 1875, Clark patterned after historic races from Epsom Racecourse in England: the Kentucky Derby and Kentucky Oaks from the Epsom races of the same name.

Along with introducing European-inspired standard weights, modern track rules and regulations, new ways of wagering, and a beautiful clubhouse and grandstand, “Lutie” Clark brought with him the Epsom tradition of going to the races to see and be seen—for both men and women.

In advance of the first Kentucky Derby in 1875, Mary Clark and all of her friends dressed to the nines and rode in open carriages around Louisville to attract socialites and influential folks to attend. Nearly 10,000 people came that first Derby, even though the weather was hot and the track was so dry that the dust was covering the crowd. One attendee wrote to the New York Graphic:

“The ladies, however, were brave to the end. The afternoon sunshine flooded the grand stand and bathed every fair form in golden light. The strong glare of light revealed defects that many divinities were not suspected of possessing. Complexions and other valuable articles were utterly ruined. Still the ladies remained for six hours at least, enduring a crowd, heat and dust not only for love of the horse, but to oblige the gallant gentlemen who had done so much to give them pleasure and exhibit to the strangers that Louisville deserved the fame for which she is credited—of having the fairest daughters in the universe.” 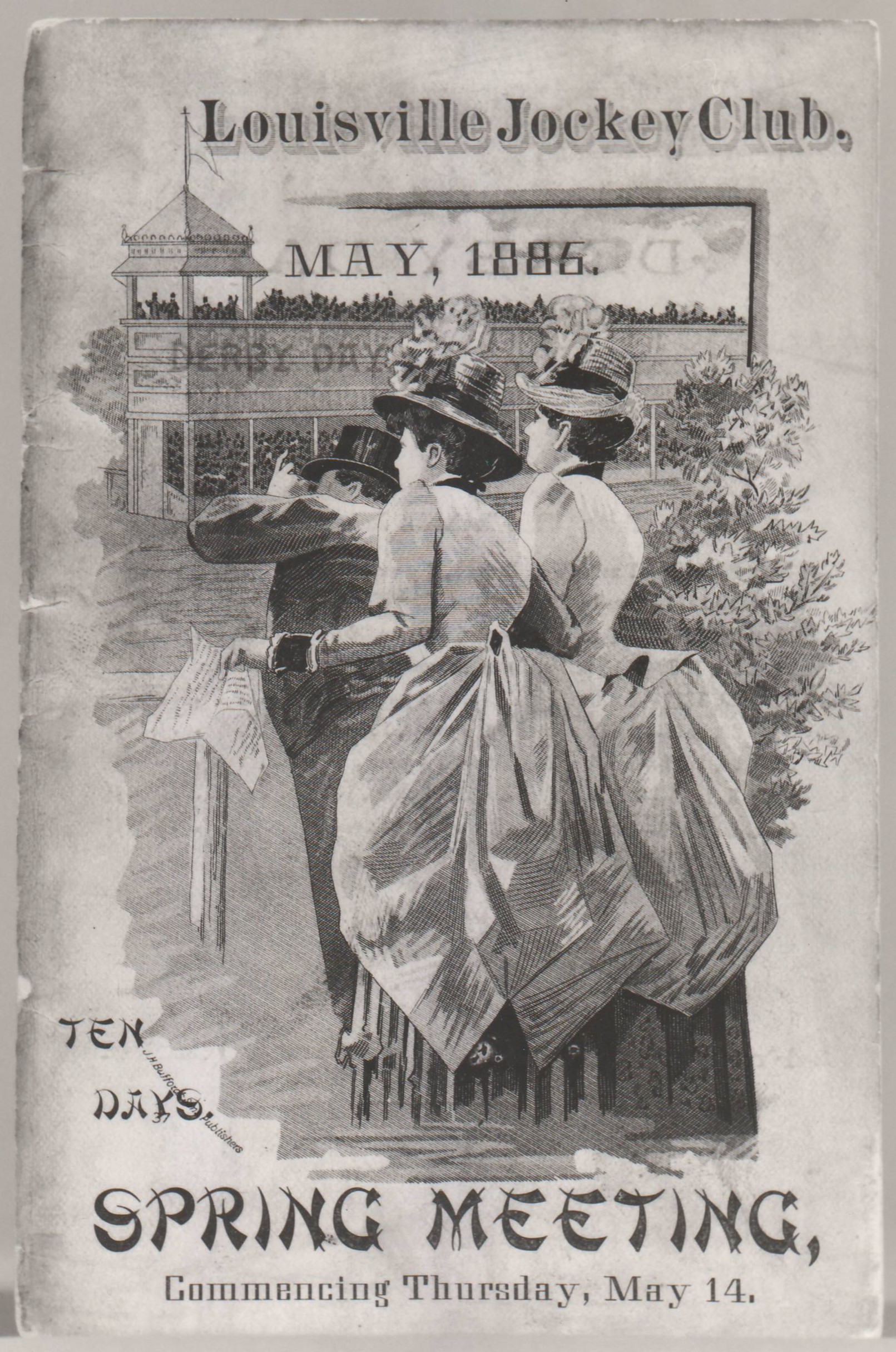 Regardless of weather, ladies fashion in the mid-1800s was hardly comfortable. Women’s traditional roles as socialites and homemakers meant their fashions favored frippery and flamboyance over practical garments that made it easy to move, work, and play. Corsets, bustles, and hats perched atop intricate hair-dos marked a well-to-do lady in the grandstand and clubhouse.

Fortunately for the ladies—as the 19th century neared its end and women began to take on civic and social functions outside the home—in-fashion attire started slimming down and becoming more manageable, despite the following comment from the Courier-Journal:

“If one were asked to name the most salient feature of the spring fashions, it would be the ‘hampering of locomotion,’ and yet lovely women managed to mount chairs or benches, or the curbrail at an alarming rate of speed…”

Strangely enough, hats—perhaps the most recognizable custom observed in a Derby ensemble these days—were not always the star of the Derby show. At the turn of the 20th century, hats were still an assumed piece of an appropriate ladies’ outfit, and therefore less of a novelty. Nevertheless, the ladies in England at Epsom had long been making statements at the track with wild headwear (anyone seen My Fair Lady?), and American women weren’t about to fall behind on that score. 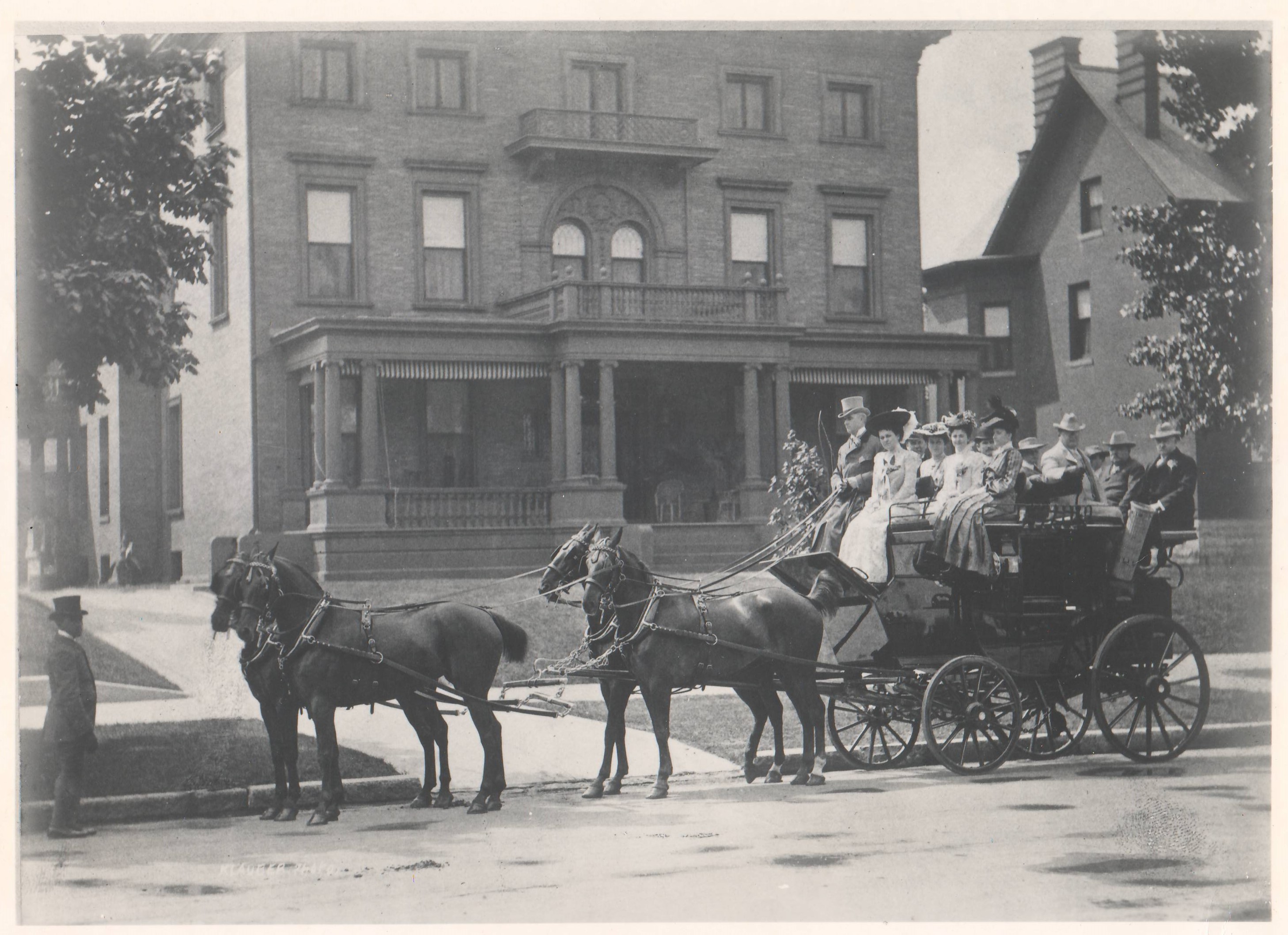 The Courier-Journal predicted the trend early on:

“This year poor woman has a lot of trouble heaped upon her poor head. However, she is responsible for it herself, and there is no doubt that the present style of hairdressing is vastly becoming, with the heavy braids and coquettish little puffs, and charming curls. In fact, if you have the hair, the hat doesn’t really matter. However, the hat was there—very magnificently and emphatically there.”

But like the crinolines and bustles, hats were steadily becoming more streamlined, less elaborate. A definite trend toward the end of the 1800s were slim, straw hats with modest decoration along or inside the brim. For example, take a look at these hats from the Kentucky Derby Museum Collection, and compare them to a column in an 1886 newspaper. 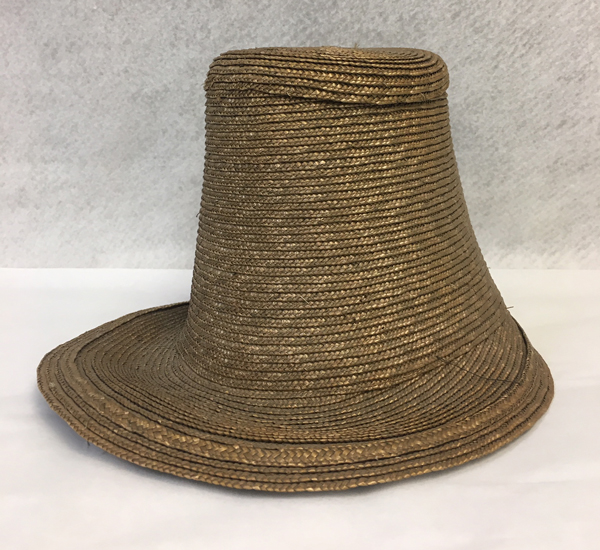 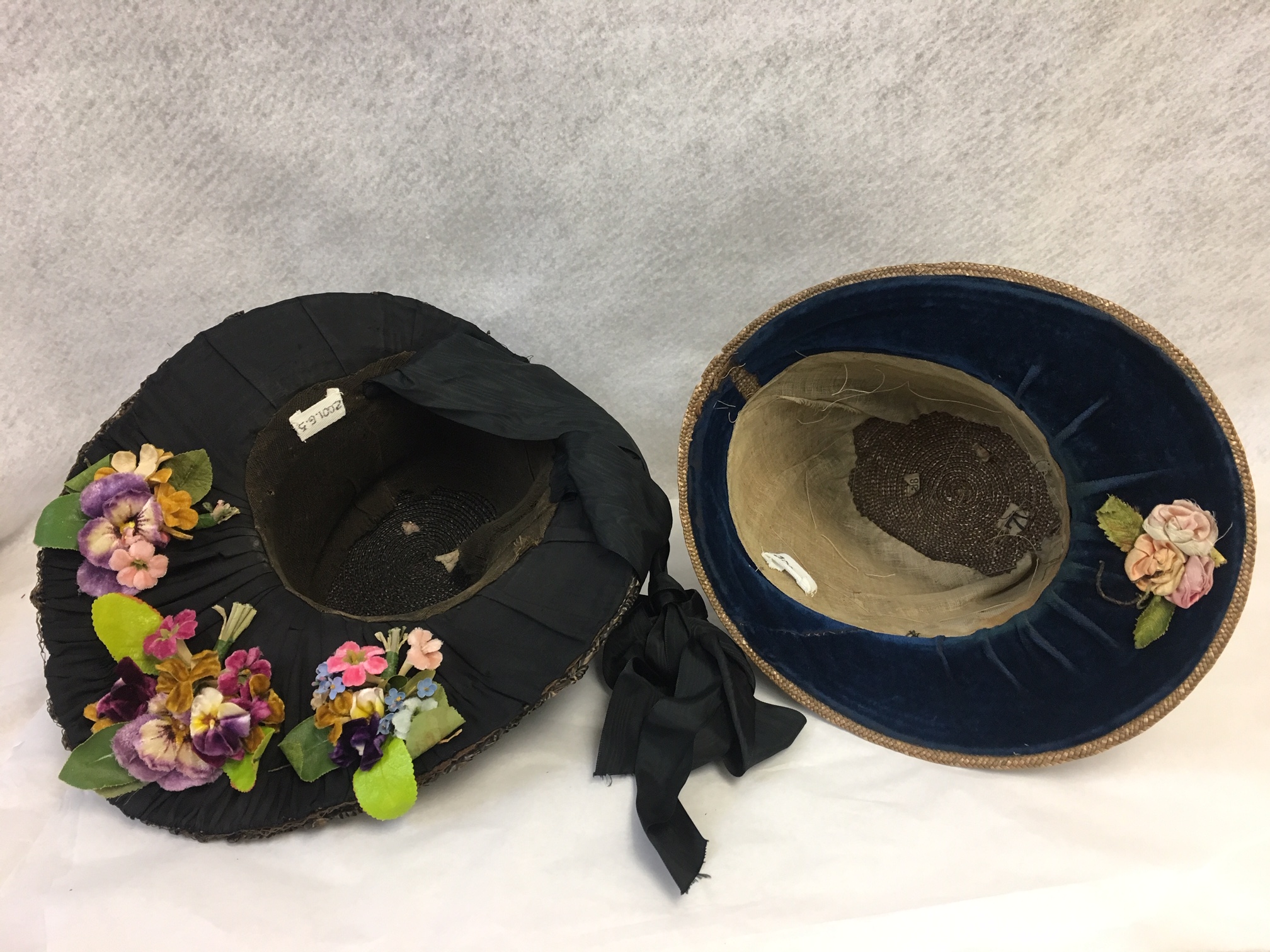 Pretty similar, right? These examples also bear resemblance to the popular cloche style that would emerge in the following century.

Although fashion has often been called a ladies’ game, 19th century gentlemen had plenty of sartorial skills to show off trackside, too. Elegant men’s clothiers like Levy Brothers Department Store catered directly to the dapper handicappers, creating a series of bowler Derby hats called the “Churchill Downs.” This one is in our permanent collection here at the museum, and still has the original, special label on the inside. 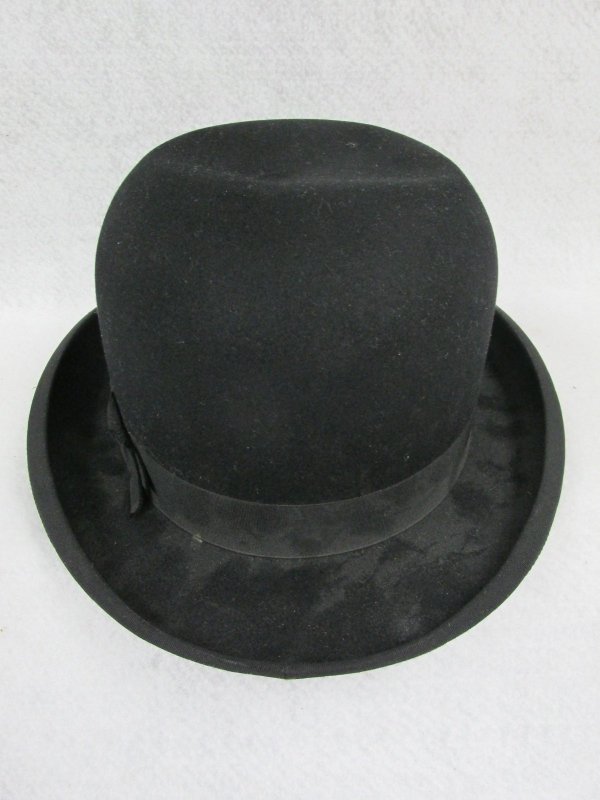 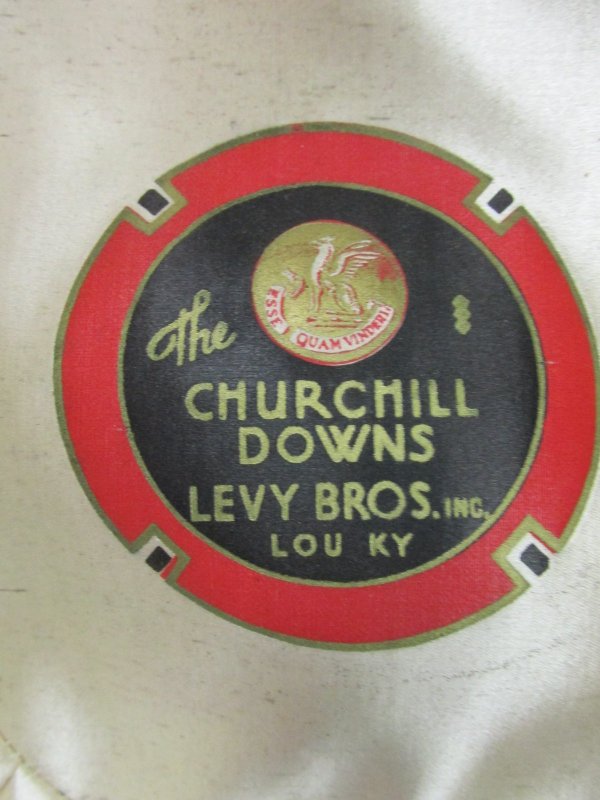 Cloth caps and straw boaters were also popular choices for men early on.