(Above photo: People with mint juleps at the 1964 Kentucky Derby)

The Kentucky Derby is as much about romance as it is about tradition. I don’t mean swooning and starry-eyed romance, but Romance, the big-R kind, thick with nostalgia and echoes of days gone by. The whole experience of the modern Kentucky Derby—with beloved anachronisms like big hats, old songs, and a syrupy-sweet drink you either love or hate—is a cultural time machine that whisks its attendees into history.

Can’t you just feel the humid afternoon air, cut by the scent of mint and the sound of clinking ice?

Kentucky’s hallowed spirit, Bourbon, is the foundation for her favorite potable, the mint julep. Like many traditions, the origins of the mint julep and its connection to the Kentucky Derby has been mythologized widely, but here are a few of our favorite fun facts about the history of Derby’s signature cocktail.

1. Mint Juleps did not originate in Kentucky, and the idea of the “julep” is older than even the United States of America.

The word was first used in the Middle Ages, referring to medicinal drinks—such as rose water—taken to stave off illness and promote good health. Even the English poet John Milton (1608-1674) wrote about juleps “…with spirits of balm and fragrant syrups mixed.”

The mint variety of the julep is an American innovation, first popularized in the coastal south of the Carolinas and Virginia. Mint juleps were the good Southerner’s morning constitutional, a soothing dram to start the day. But they were also prescribed by physicians for various ailments before the idea of anti-inflammatories emerged.

In an 1863 letter in the archives of the Wilson Library, UNC Chapel Hill, a concerned woman writes to her mother about her ailing brother’s condition: “He has been extremely feeble for several days—partakes very little, only beef tea and a mint julep four times a day.” Thanks, doc! 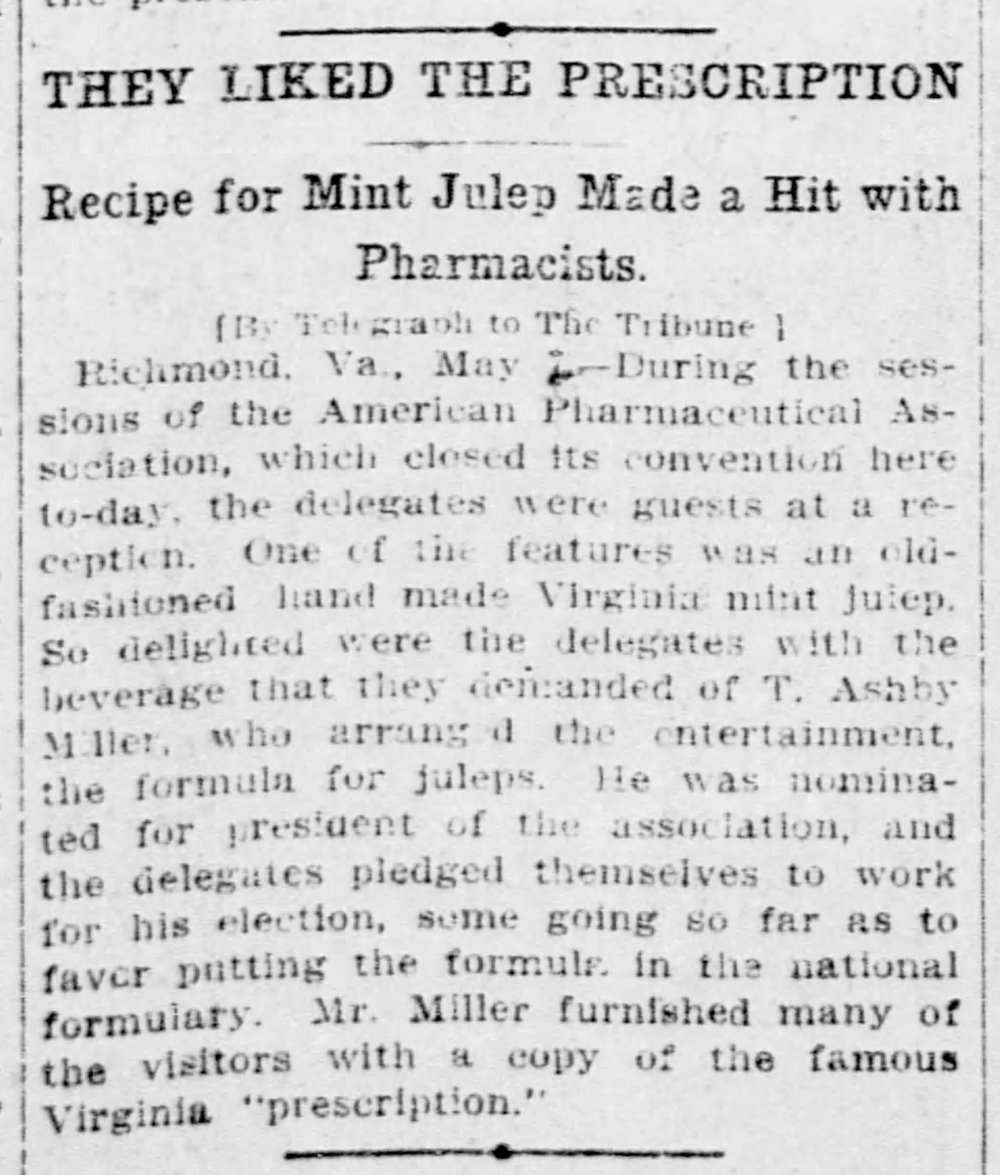 New York Tribune article from 1910, “They Liked the Prescription”

The great Kentucky statesman Henry Clay is credited with one of the definitive recipes of the mint julep, recorded in his journal in 1865:

“The mint leaves, fresh and tender, should be pressed against a coin silver goblet with the back of a silver spoon. Only bruise the leaves gently and then remove them from the goblet. Half fill with cracked ice. Mellow bourbon, aged in oaken barrels, is poured from the jigger and allowed to slide slowly through the cracked ice.

In another receptacle, granulated sugar is slowly mixed into chilled limestone water to make a silvery mixture as smooth as some rare Egyptian oil, when poured on top of the ice. While the beads of moisture gather on the burnished exterior of the silver goblet, garnish the brim of the goblet with the choicest sprigs of mint.”

3. Be ready to defend your recipe!

Kentuckians are mighty opinionated about what they believe is the proper way to make a mint julep. To muddle or not to muddle, that is the question. Irving S. Cobb joked in 1936:

“Well, down our way we’ve always had a theory that the Civil War was not brought on by Secession or Slavery or the States’ Rights issue. These matters contributed to the quarrel, but there is a deeper reason. It was brought on by some Yankee coming down south and putting Nutmeg in a julep. So our folks just up and left the Union, flat.”

An absurd exaggeration, but with the kernel of truth. Gerald Carson says in his book The Social History of Bourbon, “Considerable heat can be generated over this question of whether to crush or not to crush. But it is nothing compared to the distress which a Kentuckian feels when he contemplates the use of alien liquors, as he regards them, in a mint julep. This is the issue which estranges and embitters.”

Courier-Journal article from 1947, “The Julep is Out in Front”

4. Prohibition threw a wrench in it.

Churchill Downs naturally had to cease serving the mint julep to Derby goers during Prohibition, and the newspapers loved to report on the difference it made to the Derby experience. Here are a few clippings from the era that demonstrate these feelings.

Gallery of 1919-1920 clippings talking about the loss of the Mint Julep: