Kentucky Derby Museum has an amazing group of volunteers. Our volunteers, known as "The Outriders Society," help the Museum in many facets, by participating in research, greeting guests, helping staff with special events and administrative responsibilities and so much more. We greatly value our volunteers who are willing to share their time, expertise and experience. One of our volunteers, Bekkie Siebel, is a big Secretariat fan. In honor of highlighting Secretariat today on the Virtual Museum, we interviewed Bekkie on what Secretariat means to her. The following is her response and photos she had to share with us.

Where did your love for Secretariat begin?

One could say my love for Secretariat started the year I was born in 1972 with his stablemate Riva Ridge. In my household the horse that won the Derby the year you were born was the 1st entry in your baby book. I will admit that for years I thought Riva was a girl.

My grandfather had box seats to the Derby for years. I also have memories of watching the Derby on tv. It wasn't until 1992 that I really got into Derby history. I was looking for a new hobby so I started my research with the one horse I knew, Riva Ridge. I found so many connections to the Meadow Farm and Riva that it was love at first sight.

My 1st shock was that Riva was not a girl. No worries, I still loved him. Then came his famous stablemate, Secretariat. Oh yeah, again what is there not to love there.

So, the Meadow Farm in Doswell, VA is located just 10 miles north of Ashland, VA. I mention Ashland, VA because I attended Randolph Macon College in Ashland in the early 1990s. I also discovered that is where the Chenery boys attended college. Yes, those Chenery boys. Christopher Chenery, Ms. Penny's father, owner of the Meadow Farm. I only attended that school for a year and I was heartbroken to find out just a few years later that I was just 10 miles away. No worries, I did visit the Meadow in 2013 for the 40th anniversary of Big Red's Triple Crown win. 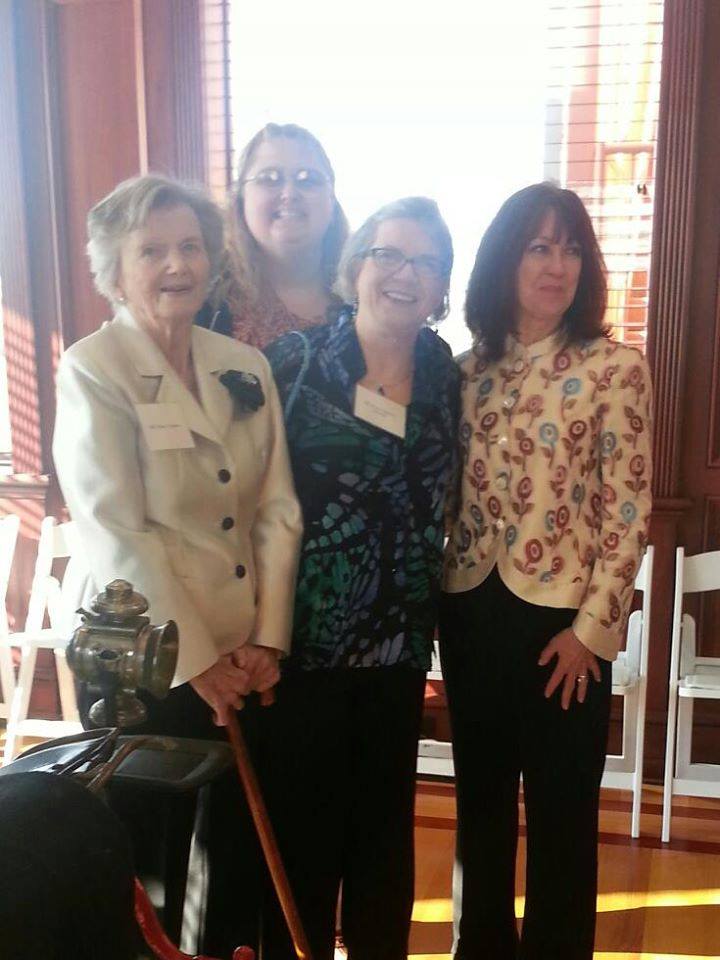 With more research I discovered that both Riva and Red [Secretariat] were both deceased but they were both buried in KY. Claiborne Farm in Paris, KY to be more precise.
I didn’t know anyone who was into horses so my hopes for a visit to pay my respects would be put on hold.

Well sadly I had to wait until 2010 when I won admission tickets to the Museum. It was then when my passion ignited. After taking the historic walking tour with some friends and getting all the Secretariat trivia correct, my friend said I should get a job at the Museum or at the least volunteer. The next day I called and spoke with Julie Henry about becoming a volunteer and have been a volunteer ever since then.

Do you have any favorite Penny Chenery memories?

It is through my connections at the Museum that I got to meet the Secretariat team as well as many fellow Secretarians who all share the love and passion for everything Secretariat. 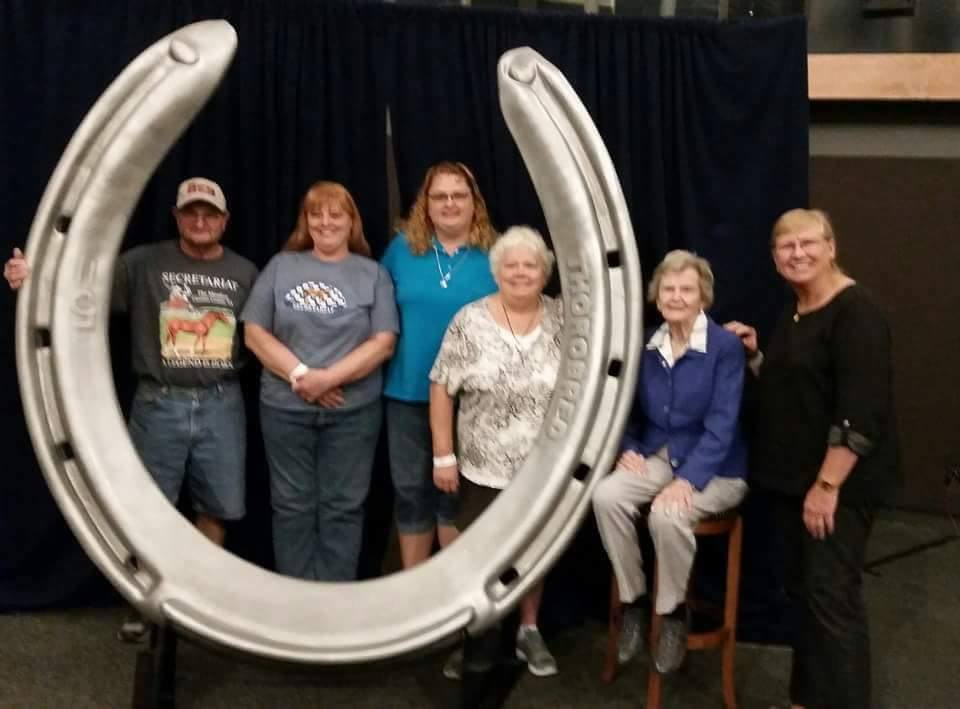 (Some of my fellow Secretarians at the KDM Secretariat Horseshoe event: Joey, Robin, Me, Patty, Ms Penny and Connie) 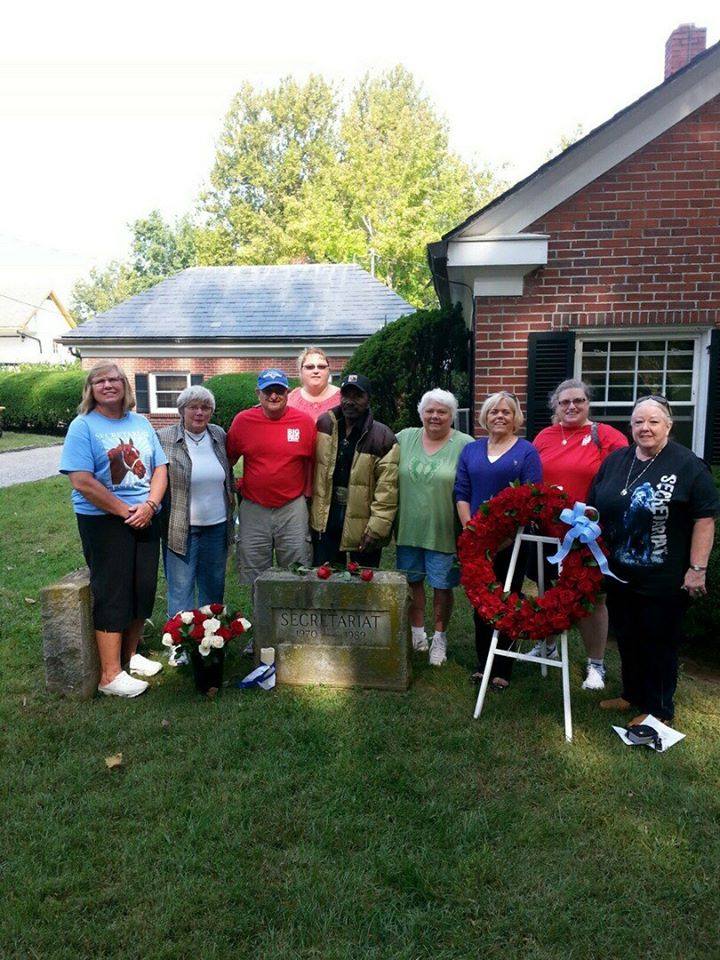 I got to meet Kate Tweedy in 2010 when her and Leeann Ladin were at the Museum signing their book they wrote about the Meadow Stables. They were also there to promote the movie Secretariat. That day that I met Kate was the same day I got my Secretariat tattoo, which was also on the anniversary of his death. Kate took a photo and said that her mom would love it.

It wasn't until the next year that I got to meet Ms. Penny. The day after the Derby, team Secretariat, were signing autographs at the Museum. It was also Mother’s Day. I was in line and saw Kate 1st and she turned to her mom and said she’s here mom, she’s here. I introduced myself to Ms. Penny and asked her if she would adopt me so that I could wish her a happy Mother’s Day and so that I would be Big Reds little sister. Come to think of it I don't think she ever answered me. So, I showed her my tattoo and she smiled and cheered. 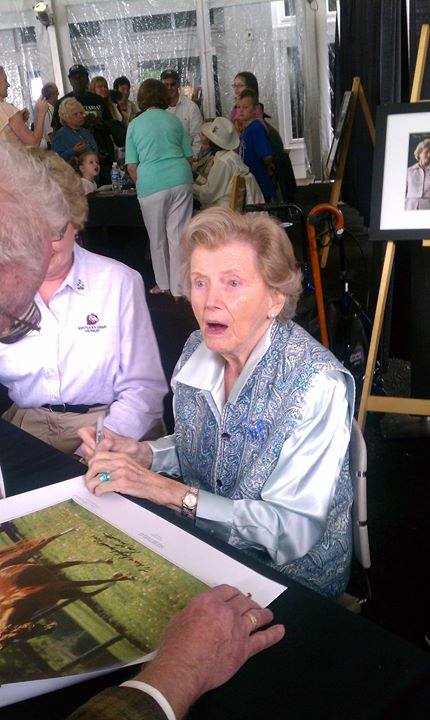 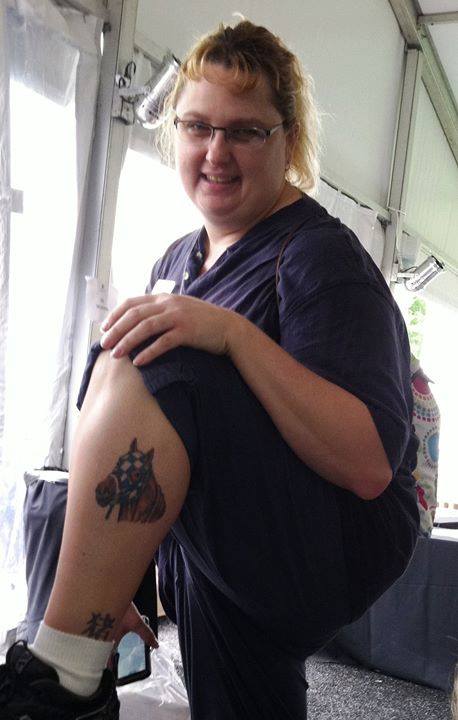 Through helping the Museum during the Secretariat festivals is how I got to know Charlie Davis [Secretariat's exercise rider]. The last few years of Charlie’s life he would call me once a month and check up on me. Oh how I miss him and the stories he would tell about Big Red. 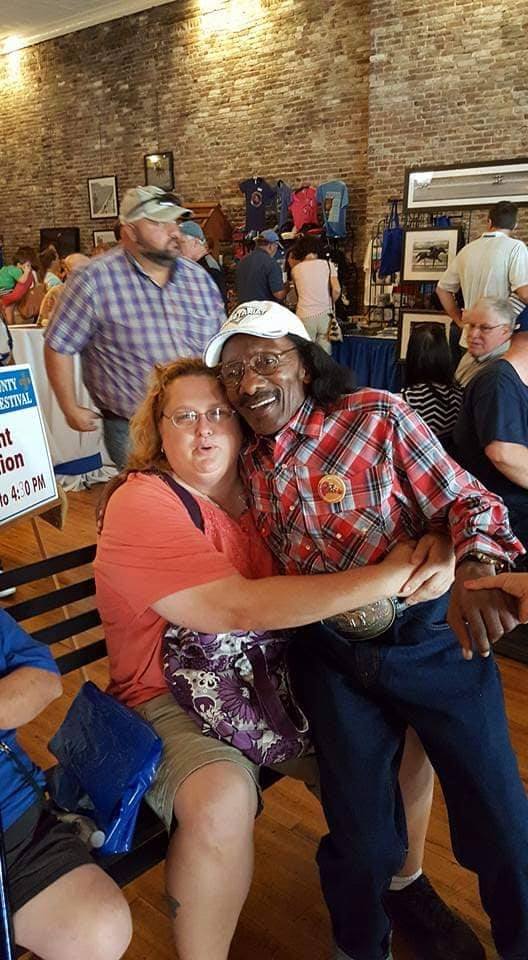 (Charlie and me at one of the Secretariat festivals in Paris, KY) 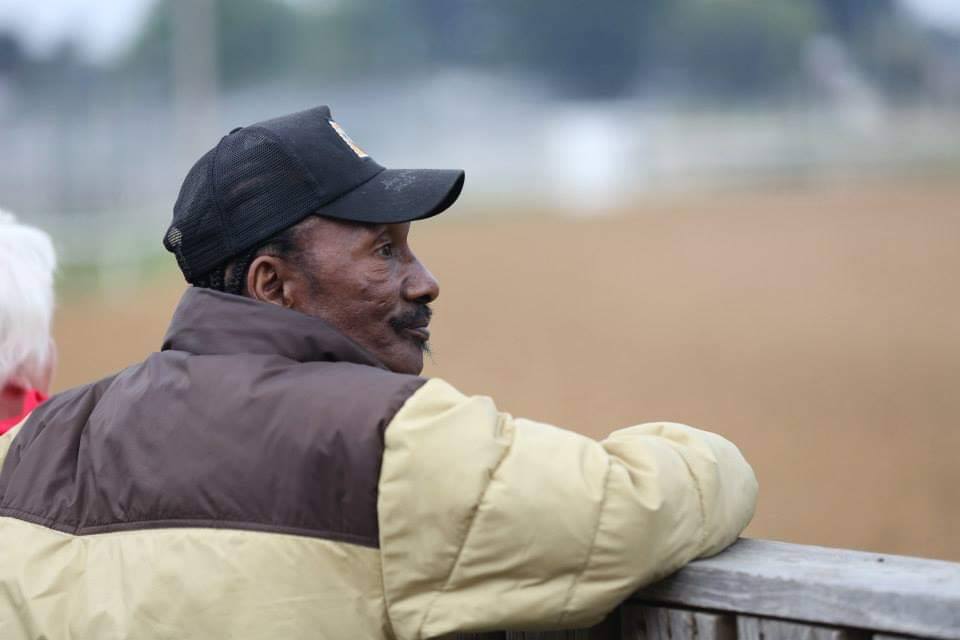 (Charlie watching the A.M. workouts on the Backside of Churchill Downs. Photo by Bill Wine) 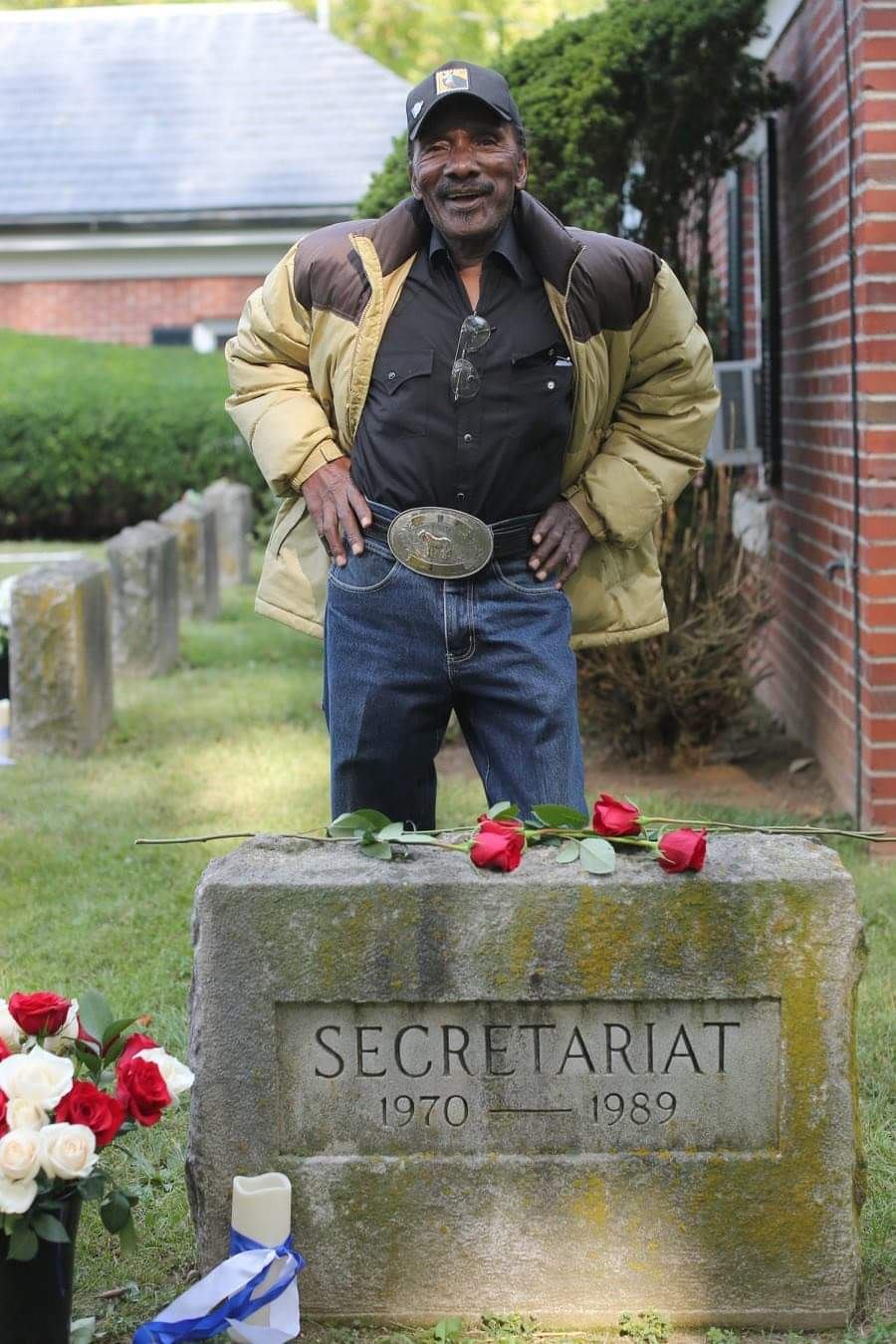 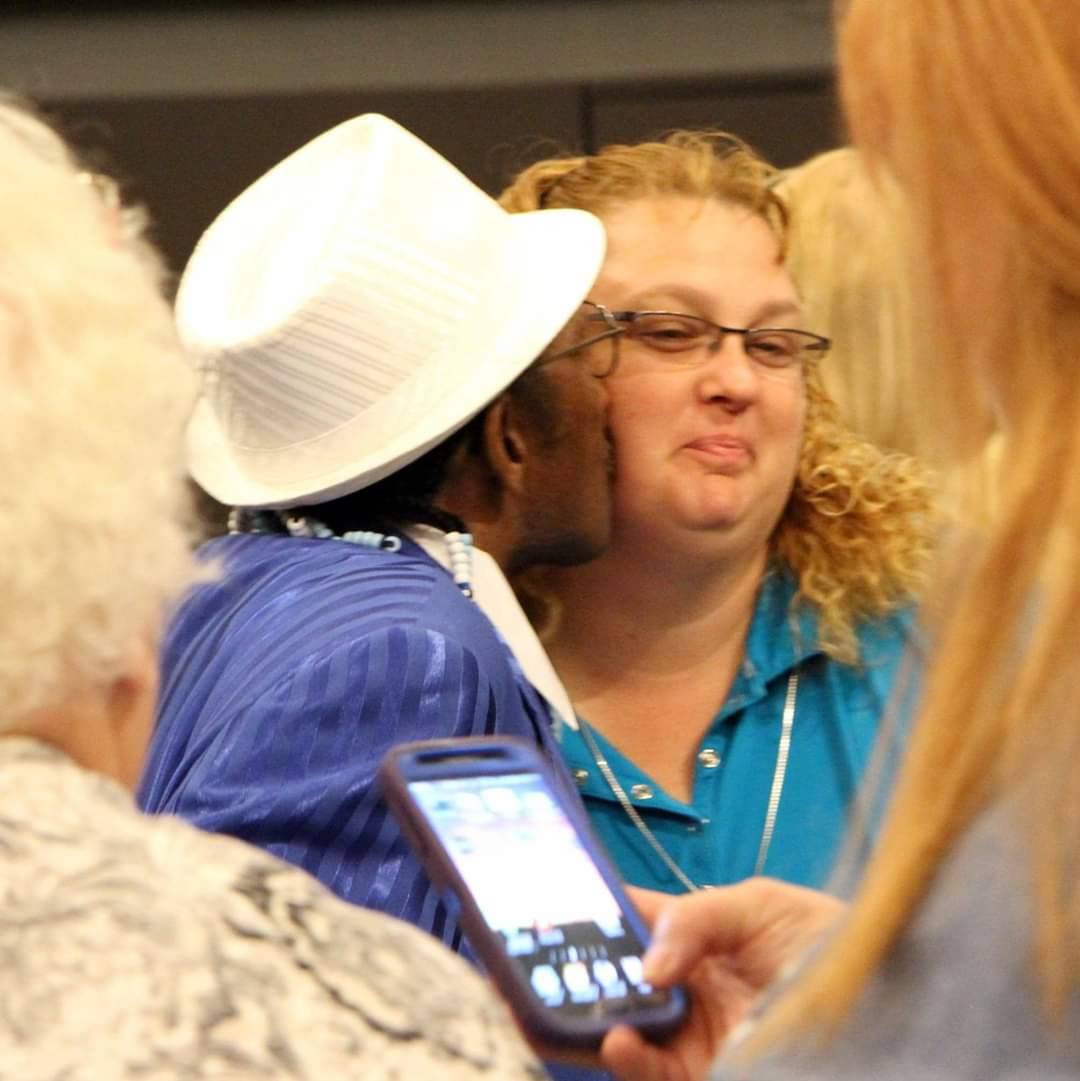 During one of Ms. Penny’s last trip to the Secretariat festival her son John was filming her and the fans because they were putting together a documentary.

During the 2013 Secretariat festival they had a screening of the completed documentary and I purchased tickets to the screening as well as the meet and greet with team Secretariat. When I got to Ms. Penny I said I know you meet millions of people each year but I was the one with the Secretariat tattoo. She smiled and said that I had made it into her documentary, well my leg did. I said WOW so maybe now you would like my autograph. She said no dear. I thought that was the funniest thing.

Do you have any favorite Secretariat memorabilia?

Many people will be shocked that I don't have a very large Secretariat collection. One of my fellow Secretarians came to stay with me and attend the 2015 Derby. She looks my house over and said where is it? I said where is what? She said your Secretariat stuff? I told her that my prized possessions I wear every day. That is, my Secretariat tattoo and my Jane Heart Secretariat necklace. She was so shocked. I do have some photos, a Derby program, the Four Roses bourbon bottle, and a quilt I made. So, to thank me she sent me a signed national historic marker for the Meadow Farm. 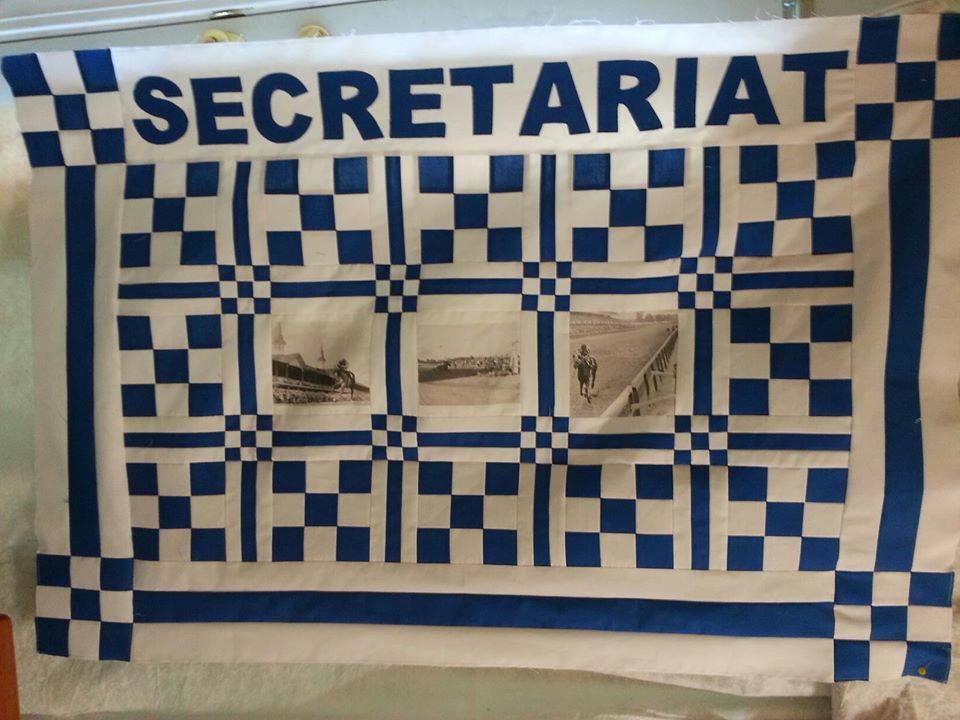 (Quilt that Bekkie made) 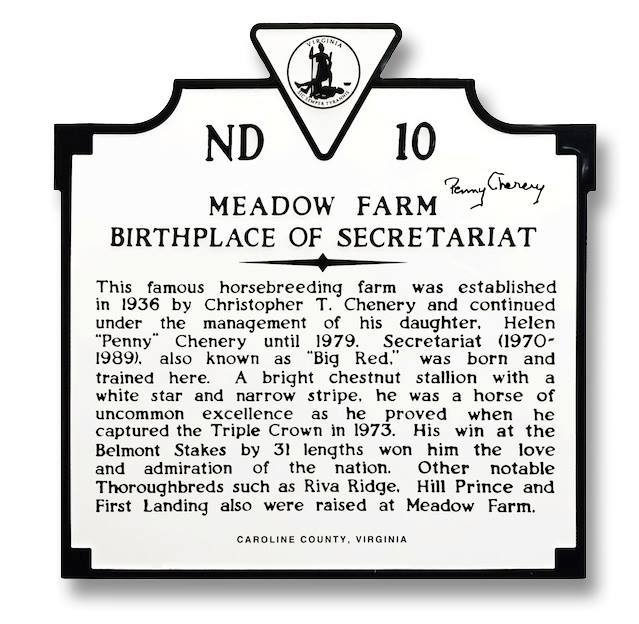 (The marker that Bekkie's friend sent her)

What is your favorite Secretariat artifact in the Museum?

As far as my favorite KDM collection piece, I would have to say everything. If I had to pick one it would be the silks. I say the silks because everyone knows who they represent. Every time I volunteer I always go to the time machine and replay his [Secretariat's] race.

Have you seen the Secretariat Disney film? If so, what did you think about the representation of his story?

Yes, I have seen the movie and was on the edge of my seat during every race hoping he would win even though I knew he was going to. But it's just that, a movie. I know and many true fans know it was Riva that saved the farm even though we all know it was Secretariat who has carried it through the years.

Why do you think Secretariat means so much to horse racing fans?

I have spoken to many young fans and asked them why they liked Secretariat or how did they learn about him. Most of them stated they just did a search and Secretariat is always the 1st to pop up. And what is not to love. As far as the older fans, they tell me it was because of the times. It was the 70s and Secretariat was a distraction. A Triple Crown hopeful since 1948, all of the records he broke as well as being owned by a female. Many have said they can remember watching him on tv or being at the track in person. With all that I can say if you just look at the pedigree of all the Derby contenders each year, many have Secretariat in their bloodlines.

It is through his bloodlines that I stay connected to Secretariat. I have never seen Secretariat in person but I have visited his final resting place many times and I have gotten to love on many of his descendants.

Tinner's Way who was dubbed Secretariat’s last living son was living out his retirement at Old Friend’s in Georgetown until his death in 2017. Many fans know that Tinner’s Way won the Pacific Classic back to back in 1994 and 1995. But how many fans know that in 1994 he won the mile and a quarter race in 1:59 2/5 seconds. Hmmm, does that ring a bell for Big Red fans? Since Tinner’s passing when I go to Old Friends now I visit with Riva Way. He is the grandson of both Riva Ridge and Secretariat. 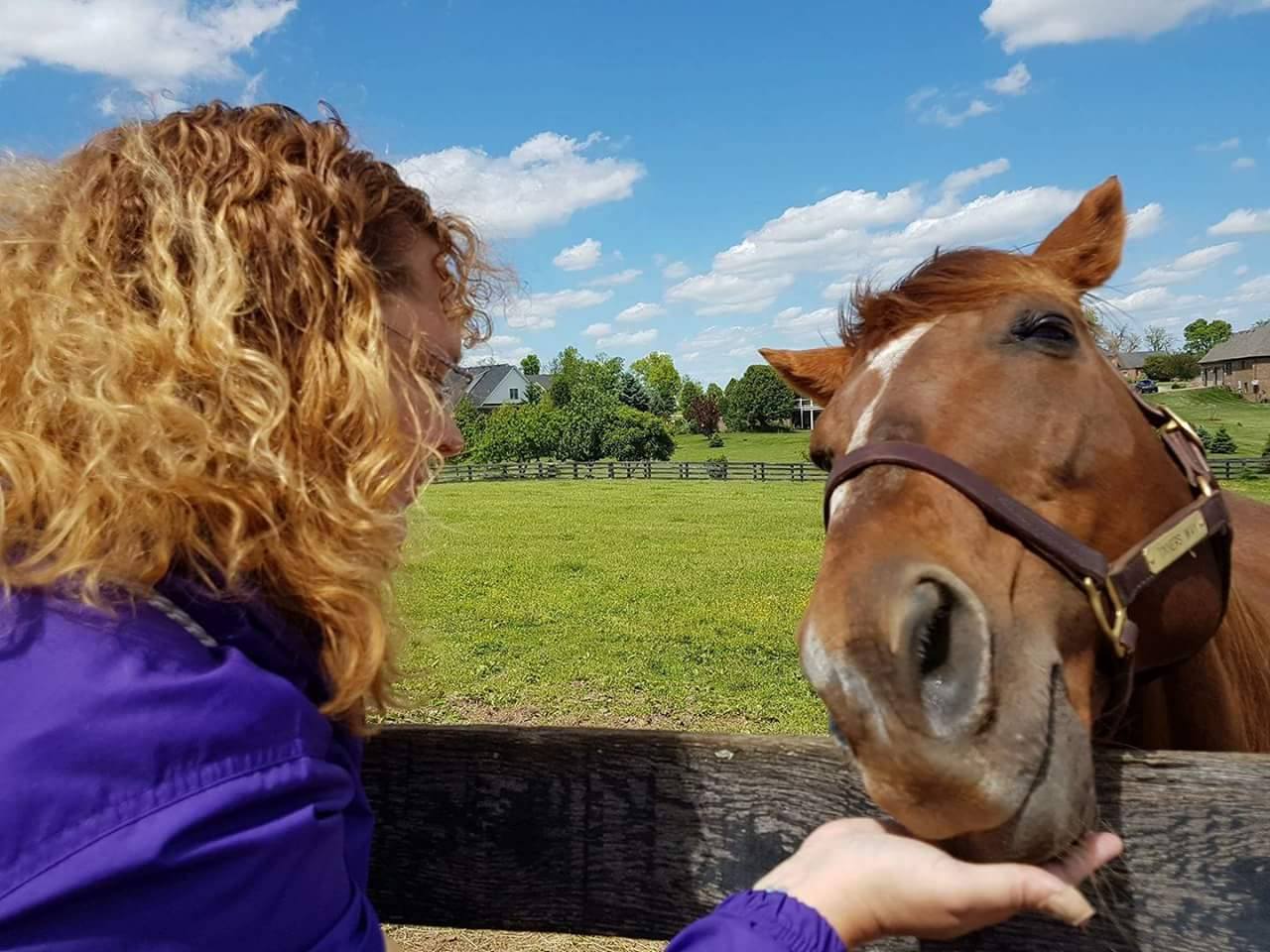 (Bekkie and Tinners at Old Friends. Photo by Jenny Murray) 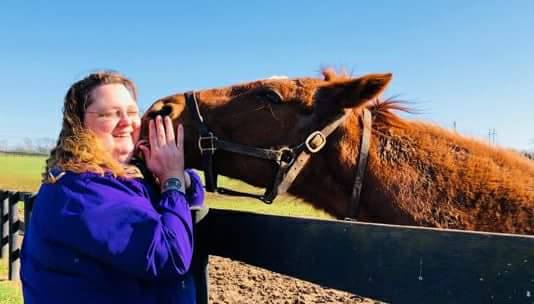