I’m back home after my first overnight week for the Kentucky Derby Museum! Destination: Paintsville, Kentucky in beautiful Johnson County. Tuesday morning, my alarm goes off at 4:45 am, and my coffee maker comes on at 4:46 am. It rained all morning long, but the 2 ½ hour drive on the scenic Bert T. Combs Mountain Parkway flew by.

I drove into Hazel Green, in Wolfe County for my first day of teaching.

I stopped at Red River Valley Elementary School, a small school with wonderful kids and staff! I taught my programs in gym, which doubled as the cafeteria. Not a big deal, I’ve done that a few times already. But this time, I taught my Econ program to the older kids, WHILE the younger grades were eating lunch behind me. That was a first! No worries though, I just talked a little louder than normal- no need for a microphone here. After my three programs, I packed up and made the hour trek over to Paintsville. It was so picturesque nestled in the hills of Eastern Kentucky. 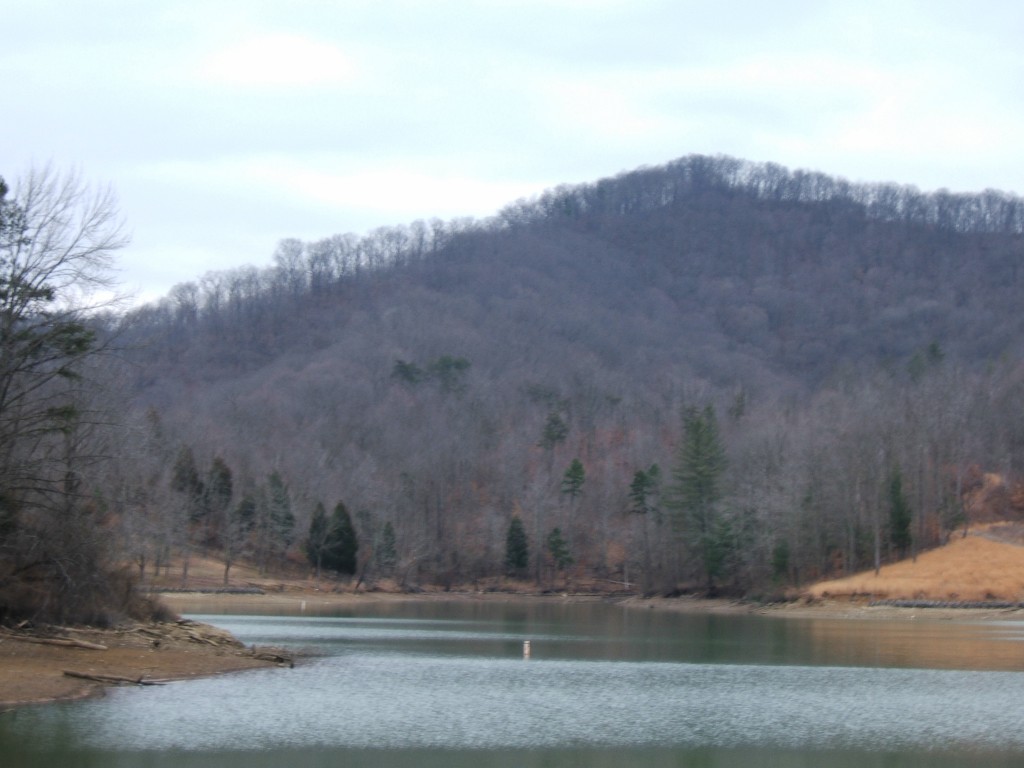 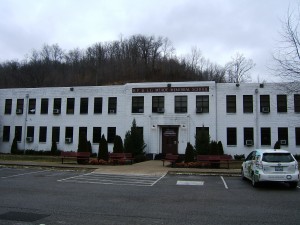 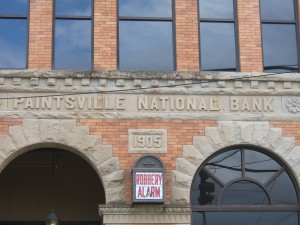 I checked in at the hotel and headed downtown for some dinner. I stopped at Mi Finca, a delicious Mexican restaurant in one of the historic buildings on Main Street. After I devoured my veggie quesadilla, I decided to take a walk and check out the town. 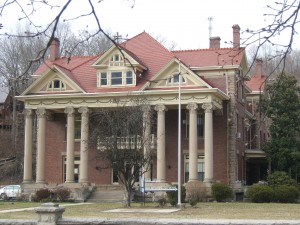 Wednesday morning, I went to my first school in the county, Highland Elementary. I walk into the gym to set up, but was a little perplexed when the teacher came in wearing clown shoes, a wig and crazy pants. “I don’t normally dress like this,” she says, “but it’s Wacky Wednesday!!” In honor of Dr. Seuss’ birthday, they were having a week of celebration. The students were pretty creative with their outfits too. So I set up in the gym to start, and then moved to the library for the rest of the day. I taught the Math, Science and Econ programs to the 3rd through 5th grade. I even had time before my next class to dress a kid up like a thoroughbred while the second graders were waiting in line to check out at the book fair. They really enjoyed the surprise demo, so did their teachers. 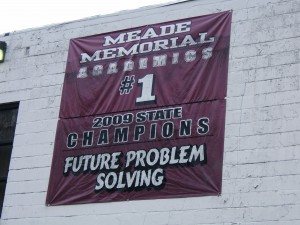 Thursday morning I ventured over to Meade Memorial Elementary, about 10 miles down the switchback mountain road that is US 40. Another very small school, one class per grade level, with VERY smart kids.

After each program, the kids were coming up to ask more questions as they were leaving the room, and one girl told me, “You are the best presenter that has ever come to Meade.” Thanks student! Put that on my evaluations! 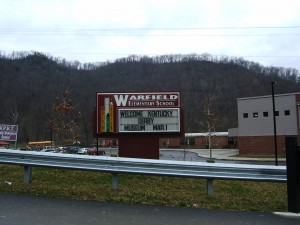 Before I left the museum on Monday, Ronnie had advised me to find the school the day before during an overnight week since I’m already in the area. Seeing as how we both have been burned by mapquest (he ended up in the middle of a corn field), google maps (LIES when it comes to travel time) and the GPS that is built into the dash of the Prius (it has, on several occasions, led me astray, continuously looped me around my destination, and told me to turn where there were no roads… “Turn left. Turn right now!” But the weirdest thing, is that there was a sense of urgency in her computerized voice.) I decided to heed Ronnie’s words of wisdom.  After leaving Meade Elementary, I continued along the switchback US 40 through the mountains to Warfield, KY, my school for Friday. REALLY glad I did, because 1- Part of the road was missing, slid right down the mountain side. 2- It took about 20 minutes longer than the directions had said. And 3- I ended up in West Virginia, but I found it!

Leaving Warfield, I ALSO found the 645 bypass that led to US 23. A wonderful, new, 4 lane (and at times 6 lane) bypass that took me right back to Paintsville! Luckily, I discovered this engineering marvel the day before, because it iced during the majority of my drive the next morning. And I knew there was no way they were going to salt the switchback US 40 at 6 am. 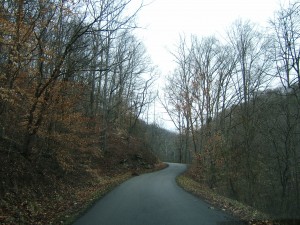 During this trip, I also discovered that Crystal Gayle and Loretta Lynn were sisters, according to the pamphlet in the lobby of the Ramada Inn. Hey, I never claimed to be a country music fan, BUT, since I’m here, might as well go check out Butcher Holler. That’s Loretta Lynn’s childhood home for those of you (and obviously myself) who have not watched Coal Miner’s Daughter. It’s only 7 miles down the road from Paintsville. 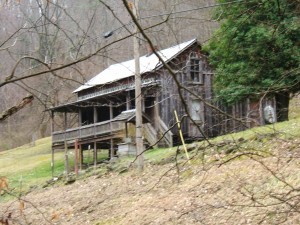 I had some free time Wednesday evening so I decided to stop at the US 23 Country Music Highway Museum, which is, misleadingly, located on US 40. It’s one mile outside of Paintsville, so I figured I’d check it out too! Oh the wealth of information you learn from the lobby pamphlets. The lady at the front desk of the museum told me about the “Front Porch Pickin’” that they host every Thursday evening. What?! One dollar admission for an evening of live bluegrass mountain jamming?? SOLD! 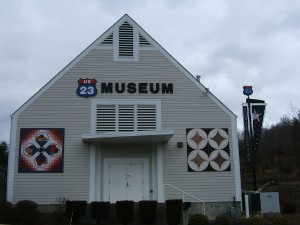 So at 7pm I pulled into the parking lot, which was packed. And yes, it was as amazing as it sounds. A night of guitars, mandolins, upright bass and the fastest, meanest banjo playing I have ever witnessed! I was even asked to dance and was able to show off my two-stepping skills I learned in Arizona. After chit-chatting with some people around me, I headed back to the hotel since I had to be up at 5:30 the next morning.

The last stop of my trip was Warfield Elementary in Warfield, KY, ironically located right between Lovely, KY and Beauty, KY and right across the river from Kermit, West Virginia (as I discovered the day before). Ms. Stepp, dressed at “Thing 1” greeted me at 7:45 that morning, continuing the Dr. Seuss celebration, and it was here, during the math program, that I had a “first time ever” moment. 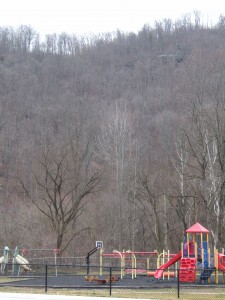 During one part of “Mathin’ Around the Track” we discuss probability, and I ask the students if they can tell me what 7 colors a thoroughbred can be. They answer, “Brown [Great job! You just gave me 3 answers- Chestnut, Bay and Dark Bay], Black, White, Grey,” but NO ONE EVER gets the last one right. I give them the hint, “It starts with an ‘R’ and it’s not Rusty, Reddish or Raspberry.” After a few, “Reds,” “Rusted,” and even a “Rainbow”- “No, but that would be pretty cool!” The last kid I call on says, “Roan.” “WHAT??” “Roan?” he answers unsurely.   “You are absolutely right! But no one ever gets that right!” So I made him stand up and had all of his classmates applaud. I finished my last lesson of the day, packed up and hit the road to head back to Louisville.

This week was amazing. Send me back to Eastern Kentucky anytime! And a big thanks to Ms. Julie, Ms. Joanie, Ms. Burchett and Ms. Stepp for the hospitality and arranging to bring me into your schools. Hopefully, I’ll see you next year!