On April 17th I visited Taylor County Elementary School in Campbellsville. It’s the largest primary school in Kentucky with close to 1300 students.

TCES ACADEMIC TEAM 2ND PLACE IN REGION. A lot of kids with a lot of talent. I saw all EIGHT 2nd Grade classes, two times each, doing Creating Traditions in the morning and Mathin’ Around the Track in the afternoon. I spent about 15 minutes of my 45 minute lunch break just trying to find my way out of their labyrinth of a school, but before I ventured out to search for the Prius, I asked, “Does anyone know who won the Derby last year? I''ll give you a hint. It has three words and it has to do with cookies, but cookie IS NOT anywhere in the title. Think about it and I’ll tell you the answer when I see you after lunch!”

After another five minutes of enthusiastic guesses, I sent them on their way. I’m sure all of their teachers really appreciated me leaving off with that query. When they walked back in that afternoon for Mathin’ Around the Track, they yelled, “I’ll Have Another!!” A teacher started laughing. “We HAD to look it up,” she said. I could only image the chaos in her classroom until she found the answer for them.   On the way home, I decided to check out Abraham Lincoln’s birthplace. This house is a full scale replica of the cabin where he was born. 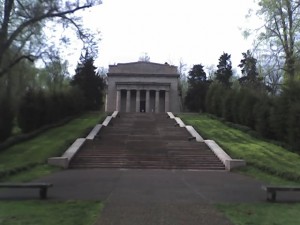 It’s the nation’s first monument to Lincoln and everything about it has significance, from the number of steps leading up to the coliseum to the number of marble tiles on the ceiling. It’s located 1 mile south of KY 9001 E, a.k.a. Lincoln Parkway, and has scenic hiking trails around it. 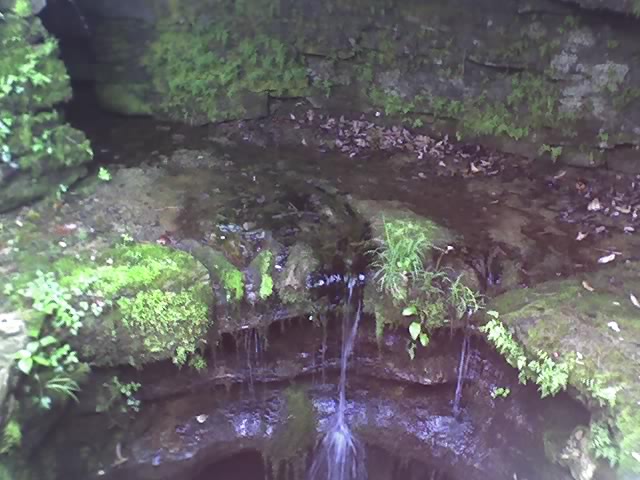 The Sinking Spring that the Lincoln’s drew water from still flows on the property today.

I also stopped at his childhood home in Knob Creek right down the road.

At both sites I had people tell me that they had just been to the Derby Museum! One group still had their admission bracelets on. The next day I visited Hiseville Elementary in Barren County. It became clear early on that I was in horse country. First clue, I drove through Horse Cave, KY on the way there. Hiseville is a very small, unincorporated community that is 0.7 sq. miles with the population listed as 240- about the same amount of second graders I saw the day before at TCES.  The Kindergarten and 1st Grade teachers had requested “Horse Tales” where I read three stories and finish with Seabiscuit. 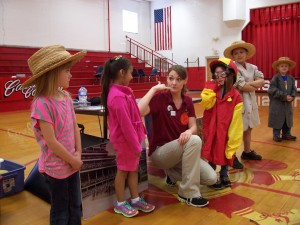 I dress kids up to bring the book to life and even call a race at the end between Seabiscuit and War Admiral. Guess who wins?! For lunch, the generous FRYSC Mrs. Hunt scheduled a longer break so I could drive into Glasgow, about 20 minutes away, to grab something to eat. As I headed down the road, I decided to turn around and drive into town to check it out. When I reached the flashing light of KY 70 and KY 740 (pretty much the city of Hiseville), I looked to my right and saw Sherry’s Restaurant. LUNCH!

When I walked in, conversation stopped. I’m not sure if it was the bright red KDM shirt or the Derby wrapped Prius that tipped them off, but they knew I wasn’t from around there. I sat down at a table but didn’t feel like an outsider for too long. Within 15 minutes I had already chatted with every person in there. A man walked in and immediately someone asked, “Hey Robert how’s your colt?” He answered and sat down at the table between me and the rest of the fellows eating lunch. Soon we were all talking about Derby horses.

The waitress came over to take my order. “What’s the Austin Burger?” I asked and pointed to the marquee. “It’s a bigger patty than normal with bacon, cheese, jalapenos, 1,000 Island Dressing, tomato, onion and lettuce,” she said. My mouth started to water. “I’ll have that.” Robert started laughing, “Austin is my grandson. That’s his burger.” He asked why I was in town and I explained the traveling that I do as the Outreach Educator. I mentioned that I was down at Hiseville Elementary for the day just as the waitress came back with the culinary masterpiece. Coincidentally, she’s Austin’s mother and told me that he’s a student there and loves history and science.

“Well that’s perfect,” I said, “because the program I’m doing for his grade combines both! I’ll have to call him up.” She grinned and assured me that he would love that. When she brought my check back, Robert grabbed it off the table. “Don’t worry, lunch is on me,” he said. I shook his hand and thanked him. A man sitting two tables away said, “Don’t feel so special. He’s just going to throw it in the trash.” He laughed, “Not a big deal when you own the restaurant.” Then he tried (unsuccessfully) to get Robert to throw his ticket away too.

That afternoon, Mrs. Hunt combined the 4th, 5th and 6th graders into one assembly for “Odds in Every Day Life.” I always end the program by explaining how they determine a Derby horse’s position in the starting gate with a traditional pill pull. I stopped, completely serious, and called the boy out of the crowd. His classmates started to giggle as he nervously walked up to join me. We stood in front of nearly 175 students and staff. I nodded slowly, “I’ve heard of you.” Everyone was silent. Then I smiled and said, “So I just had this delicious Austin Burger down the road at Sherry’s Restaurant,” and the gym exploded with laughter. I told him it was a good thing that he wore his cowboy boots that day because I was putting him to work. He was so excited! I made him one of my officials for the 2013 Hiseville Derby and called up seven “horse owners” out of the crowd to help us demonstrate the pill pull. 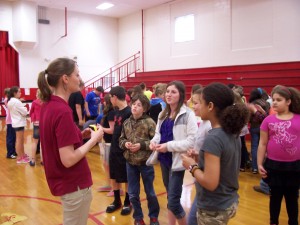 After I finished with Q & A, a group of students, full of equine knowledge, came up to tell me about their horses and ask questions about becoming a jockey.

They were such interesting kids and even taught me a few things during our conversation.