The period from 1900-1950 in American history marked a major turning point for women in society, and their wardrobes changed with them. Famous Hollywood costume designer Edith Head once said, “You can have anything you want in life if you dress for it.” What did women want?

Change. In the era of Women’s Suffrage, women were entering the work force, gaining social mobility, and finding new ways to express themselves as outdated modesty restrictions dropped and hemlines rose. More women wanted to attend the races as well, escorted by dates or—as became more and more frequent—groups of horse-loving girlfriends out to see the sights and place a few bets. Where women had once been the decided minority in the stands at Churchill Downs, the Courier-Journal reported in 1910:

“Fully 75 per cent of the seats were occupied by women, something that has never been witnessed before at the running of the Derby. Those women represented the beauty, refinement and intelligence of Kentucky, Tennessee, Indiana and other States. Their costumes were simply dreams of creation, and the multitudinous colors sparkled like brilliant gems in the warm sun’s rays.”

Part two of our history of Derby ensembles takes a look at the rapidly-evolving frocks and trimmings for fashionable trackside ladies through the Jazz Age and into wartime.

At the turn of the 20th century, ladies’ looks were still conservative but they were starting to relax.

Instead of corsets or bustles, women were opting for looser-fitting sheath dresses with eye-catching elements like intricate beading, embroidery, lace, and fringe. Such feminine accents made a nice contrast to the increasingly masculine silhouettes of women’s clothing, beginning in the early 1900s. The introduction of the tailored women’s suit became very popular for the stylish set. From the Courier-Journal:

“…sport coats that despite their mannish lines were constructed of exquisitely delicate fabrics, including crepe de chine, and skirts with pockets, both broad and deep were noted…there were the new ‘fabric’ hats, and here and there, sable furs that were worth almost as much as the heavy prizes hung up for the big races.” 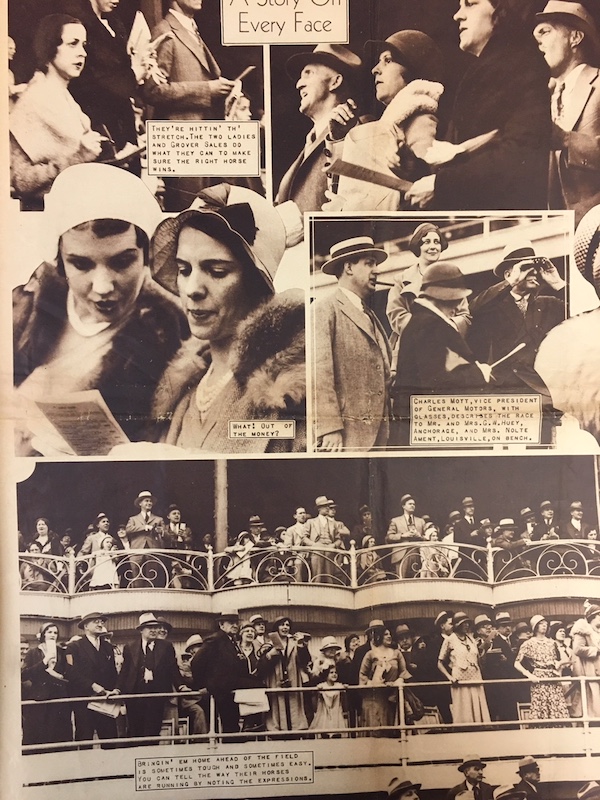 Newspapers continued to eagerly report on track fashions into the 1940s. Early in the century, Derby fashion coverage included minutely-detailed descriptions by socialite, for example:

However, as photography became more affordable and prevalent, papers like the Courier began devoting entire spreads or sections to photojournalistic celebrations of all things sartorial on Derby Day—further incentive for attendees to up their outfit game. Here are a few examples of these fun features from the 1920s-1930s.

Churchill in the Jazz Age

Despite Prohibition putting a damper on some of the traditions of the track—like enjoying a refreshing bourbon cocktail—race-goers still served up all kinds of fabulous ensembles. To suit the newest fashions in hairstyling, like the popular bob, hats became smaller and slimmer: turbans, toques, and close-fitting cloches had the day. 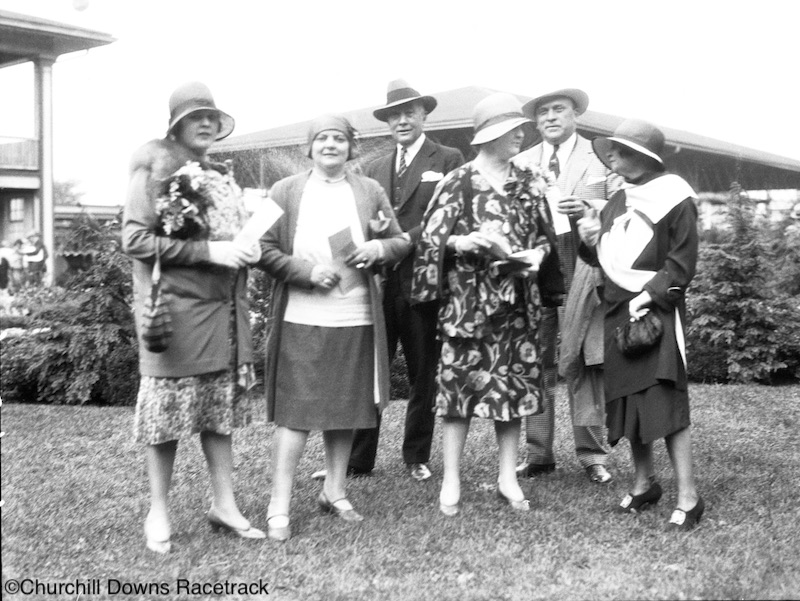 Department stores in Louisville capitalized on the Derby fashion craze, ramping up their targeted advertisements for apparel in newspapers and magazines. Popular hotels, like the historic Brown Hotel in downtown Louisville, advertised the convenience of their shops on the ground floor. The “fashion economy” of Derby season continues to be one of the major economic bolsters to the city, along with the hospitality, transportation, and food and beverage industries, which generates an estimated $400 million across the region.

By this time, fashionable women’s suits and jackets were quickly replacing full-length dresses, and those who wore dresses showed off their ankles beneath pleats and flounces of gauzy, patterned fabrics. This ensemble—worn in the 1930s to the Kentucky Derby by Grace Galvin Nelson, wife of a Churchill Downs board member—is a perfect example. 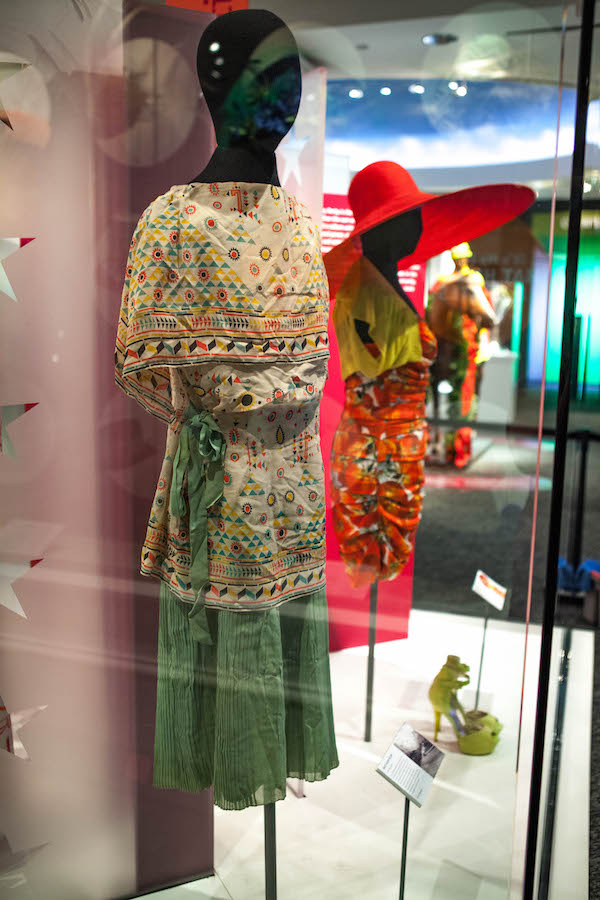 Grace probably would have paired the outfit with a cloche and a fur-lined coat, as seen on some of the women in these Derby Day snaps.

World War II transformed American culture in the 1940s, and fashions changed with it. While many men were literally coming to the races in uniform—Churchill Downs held many military appreciation events throughout their history and donated the proceeds of many major stakes races to the Red Cross during this period—women, too, were joining the war effort.

Ladies who did, and didn’t, serve wore hats and suits that mimicked military and medical corps styling: off-the-face hair, small hats, crisp suits, modest colors and embellishment. Everything had become more practical and affordable during a time of national crisis. 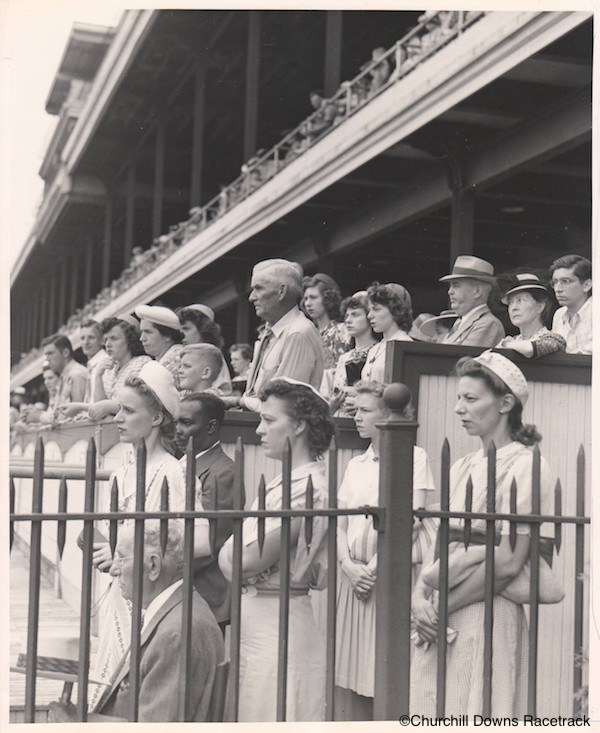 Let’s Hear it for the Men, Again!

The fedora—to this day a staple of male Derby goers—made its debut during this period. Wide-brimmed or narrow-brimmed, patterned fabric or plain wool felt, the fedora became the most popular piece of men’s headwear. Here’s an example of one of Triple Crown-winning trainer Jimmy Jones’ iconic fedoras from the Jones Collection at the Kentucky Derby Museum. 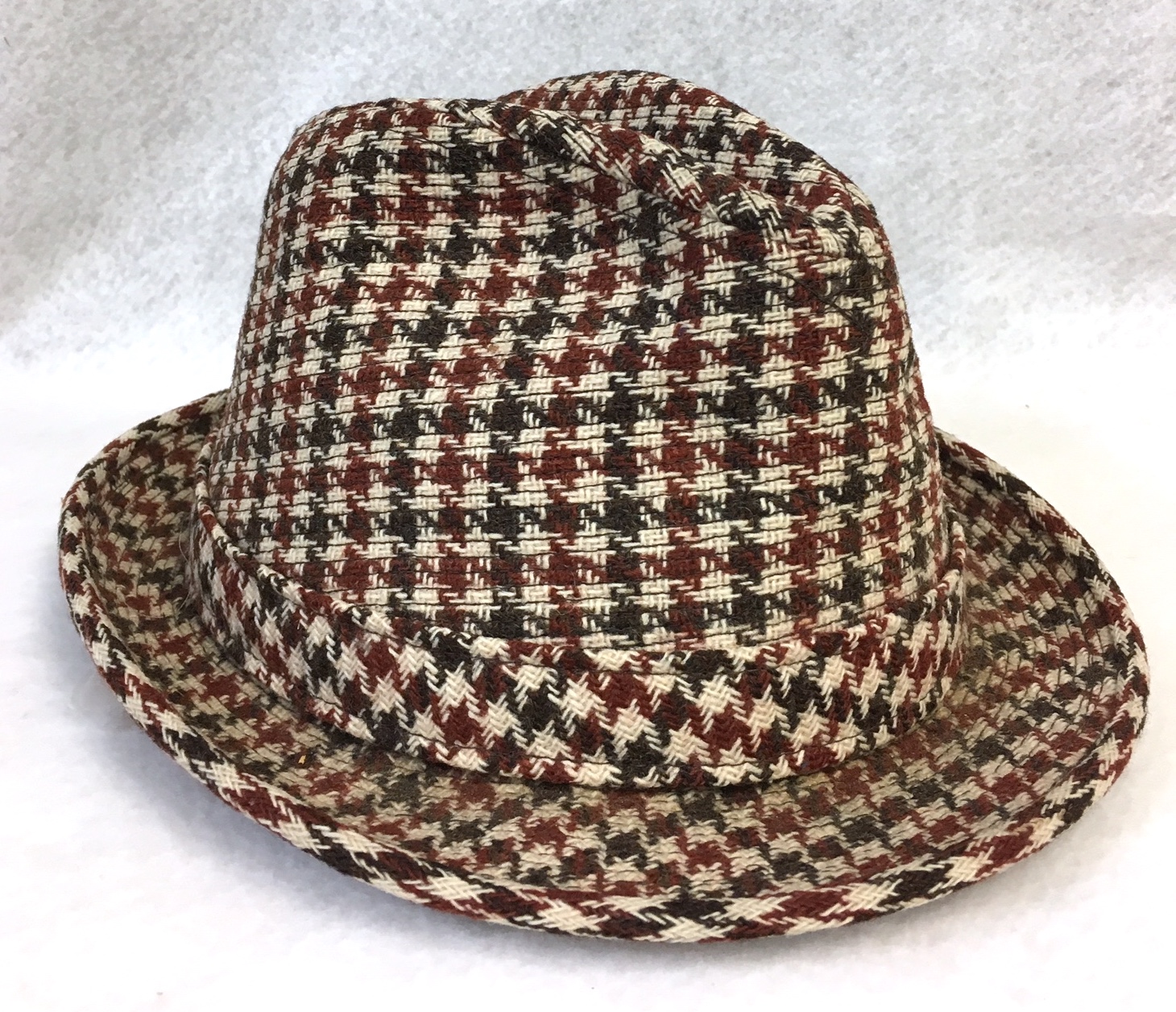 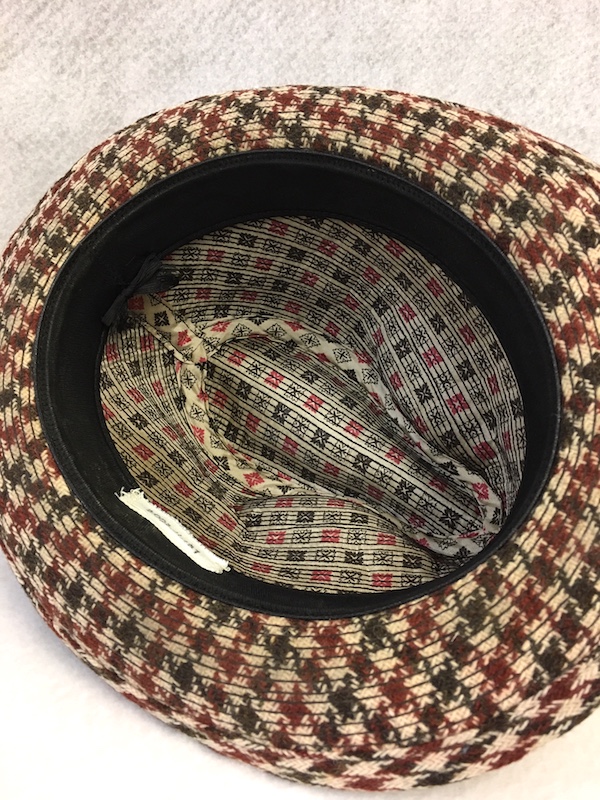