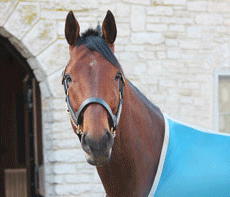 According to a press release on The Paulick Report, the Seitz family’s Brookdale Farm in Versailles, Kentucky announced the arrival of what is believed to be the first foal of the initial crop of Triple Crown Winner American Pharoah. Born at 12:30 a.m. on January 3, the cold is the first foal out of the maiden mare, Kakadu.

Kakadu is a 4-year-old by Tizway and a half-sister to multiple graded stakes winner Protonico, from the immediate family of Chilean Horse of the Year and American Grade 1 winner Wild Spirit.

American Pharoah settled into life as a stallion in November 2015 at Ashmore’s Coolmore Stud also in Versailles, Kentucky. He is expected to produce about 150 foals from his first breeding season so be on the lookout for more birth announcements soon!