It’s fitting that something which seemed so impossible looked so easy and natural in the end.

American Pharoah etched his name among Thoroughbreds immortals June 6, winning the Belmont Stakes and becoming just the 12th Triple Crown Champion in the history of the sport. He is the first in 37 years, dating back to Affirmed in 1978.

But it’s the way he accomplished the feat that seemed so improbable. Coming down the backstretch at Belmont, where so many others had come up just short, American Pharoah looked immortal. The horse led from wire-to-wire and cruised to the finish line, winning by 5 ½ lengths, the fourth biggest margin in Belmont history.

The trip was similar to what took place three weeks prior in the Preakness Stakes, when American Pharoah overcame a sloppy track and was never seriously challenged in winning by seven lengths. Combined with American Pharoah’s thrilling Kentucky Derby victory, never will there be any doubt who the best 3-year-old in Thoroughbred racing was this season. And quite possibly, for many more seasons to come.

Several changes recognizing the historical achievement of American Pharoah will be unveiled at the Kentucky Derby Museum. Multiple banners and displays congratulating the most recent Kentucky Derby, Preakness Stakes and Belmont Stakes victor were made available immediately following the Belmont, including one located on the exterior of the Museum’s main entrance. 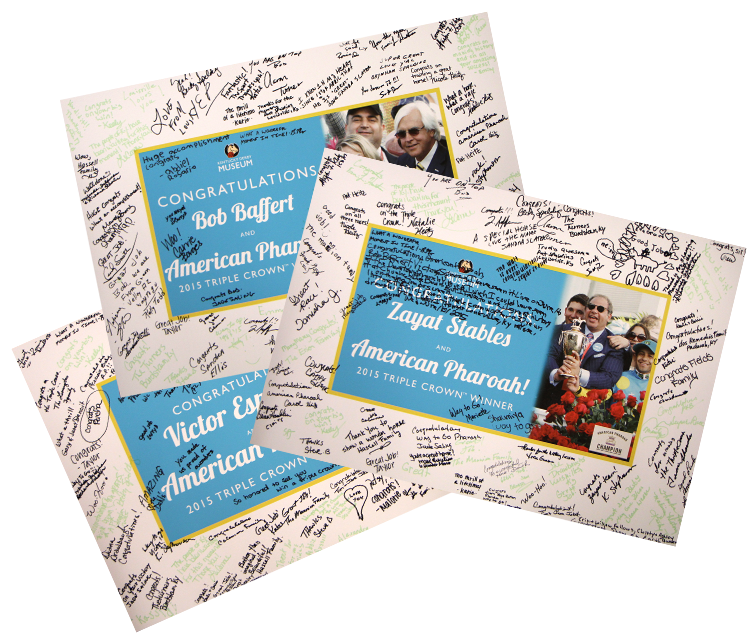 The public formally sent their congratulations to the American Pharoah team by signing large cards that were shipped to owner/breeder Ahmed Zayat, trainer Bob Baffert and jockey Victor Espinoza. Video of American Pharoah’s race is also available in the Warner L. Jones, Jr. Time Machine, joining Secretariat, Seattle Slew, Affirmed, War Admiral and others in the elite Triple Crown category. The case on display formerly home to the Triple Crown Trophy has been updated, congratulating American Pharoah on his unique accomplishment.

Other changes in the works include the addition of an American Pharoah Kiosk alongside fellow Triple Crown Champions on the first floor, a banner representing American Pharoah’s silks hung in the center of the Great Hall and video of the Kentucky Derby, Preakness Stakes and Belmont Stakes running in a loop in the Capture the Moment exhibit inside the lobby. In addition, all artifacts on display related to any Triple Crown Champion will receive a special label commemorating the achievement.

Three generations of people were either very young or not even born when Affirmed became the last Triple Crown Champion in 1978. Before becoming preoccupied with the future, let’s celebrate the accomplishment, as we are among the few who’ll get to say they remember when American Pharoah made history. Congratulations to Zayat, Baffert, Espinoza, and most of all, American Pharoah, for providing a truly historic moment that will resonate for generations.