Sir Barton won the first Triple Crown championship in 1919, and a century later we’re celebrating the thirteenth Triple Crown winner, Justify. Here’s an unexpected way to compare these bookends of the Century of the Crown: temperament.

Sir Barton was notorious for being one grumpy guy. His groom, who called him “Sammy,” was one of the few people he would cotton to; otherwise, dealing with Sir Barton on a day-to-day basis sounded like it was a real struggle. From an April 1919 article in the Daily Racing Form calls it his “exuberance of spirit,” although Commander J.K.L. Ross’ son Jack in his book about the Ross stables Boots and Saddles called him downright evil.

Images of H.G. Bedwell and J.K.L. Ross from Sir Barton's winner's sampler shown at the beginning of the blog. Courtesy of Churchill Downs Race Track and the Kentucky Derby Museum Permanent Collection.

“Apparently it is not of a vicious type,” the author writes, “a sweater and a shirt torn bodily from one of the stable lads and a fortunately harmless attempt to chew up an electric light bulb at the top of his stall being among his latest exploits.” Lightbulbs weren’t the only thing his handlers needed to watch out for; Sir Barton would regularly poke his head out of his stall and take a nip at whoever was passing by.

But beyond these kinds of antics, Sir Barton was also a little headstrong when it came to training. His trainer, Guy “Hard Guy” Bedwell, often had to trick him into his conditioning by simulating race conditions with a small field of stablemates. Jack Ross writes, “[Sir Barton] refused to run a lick in trials except when accompanied by several pacemakers who took him on in relays. In fact, he always had to be deceived into thinking that these workouts were really serious contests and, since he required a great deal of work to bring him up to top form and to keep him there, the problem for his trainer was not simple.”

Bedwell attributed it to his superior intelligence, calling him “the wisest horse in the world.”

Simplicity isn’t necessarily the surest guarantee of a great horse’s career, though. Sir Barton balanced his attitude problem very easily with an outstanding racing career. He may have been difficult, but he was a fierce competitor and loved to win races. His fans certainly weren’t short of praise; in May of 1919, The Baltimore Sun ran an ode:

“He was bred in Old Kentucky

Where the meadows’ grass is blue,

And he was trained in Maryland

The whole mild winter through.

He won the Derby in the mud

Which proved his speed was true,

And now he’s won the Preakness,

Sir Bart, hats off to you!”

A copy of J.K.M Ross' book Boots and Saddles about his father's career and the careers of his most famous horses--including Sir Barton. Courtesy of the Kentucky Derby Museum Library. 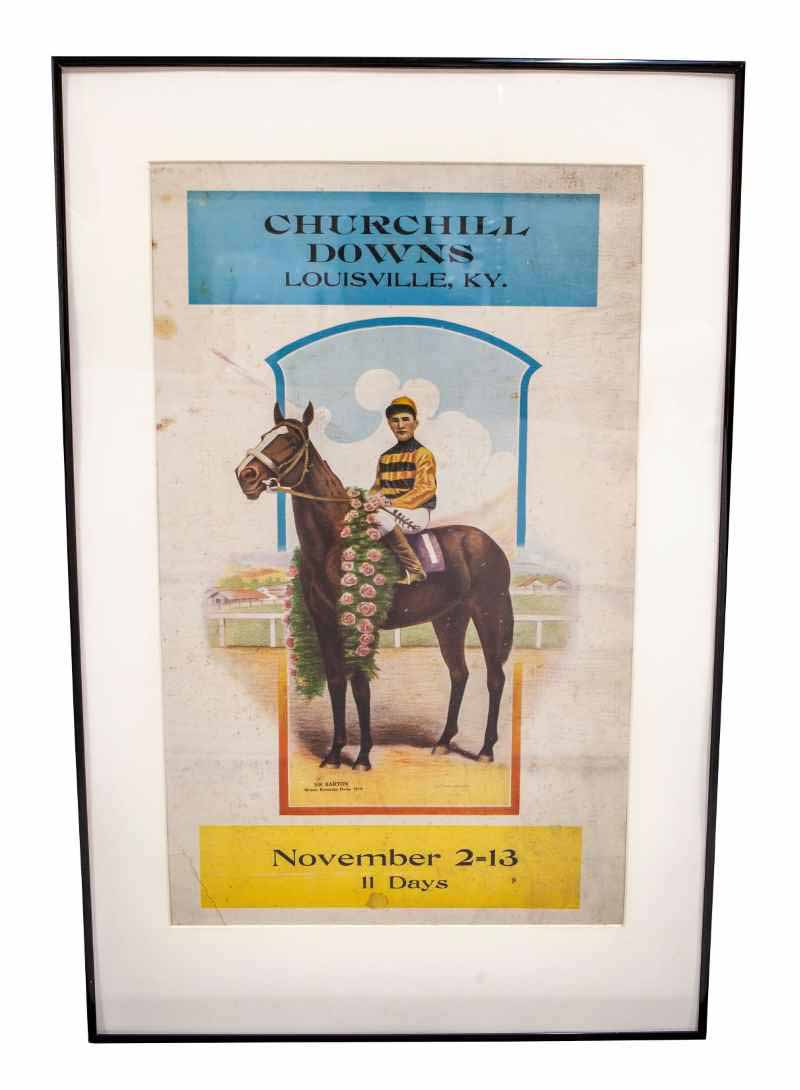 2018 Triple Crown winner Justify was no Mr. Congeniality, either. Especially in comparison to his beloved Triple Crown predecessor American Pharoah—who adored attention and his clamoring public—Justify was more focused on the job at hand. CEO of WinStar Farm Elliott Walden explains, “He’s not a horse that embraces people, though, I mean, he’s a little bit standoffish. He’s very happy to do whatever you want him to do, but he’s not the one that is lovey-dovey and wants you to come up and pay a lot of attention. But he was always very professional and did everything that we asked him. We loved his action, loved the way that he moved, and we were excited about him from day one.”

Perhaps the following from J.K.M. Ross is applicable to all of those “professional” horses like Sir Barton and Justify: “Sir Barton had nerves of steel. In his code of equine ethics, displays of maudlin sentimentality were not permitted. According to his standards, competing with other Thoroughbreds and defeating them was the only worth-while aim in life.”