What do The Matrix, a GIF, and Edgar Degas have in common? Believe it or not: horses. Even after the locomotive and “horseless carriage” essentially dethroned horses in the realm of transportation, our equine friends still played a central role in some of the most important technological advancements of the 20th century. One of these innovations—created by photographer Eadweard Muybridge—is widely credited as inspiration for a host of modern animation and cinematography techniques. 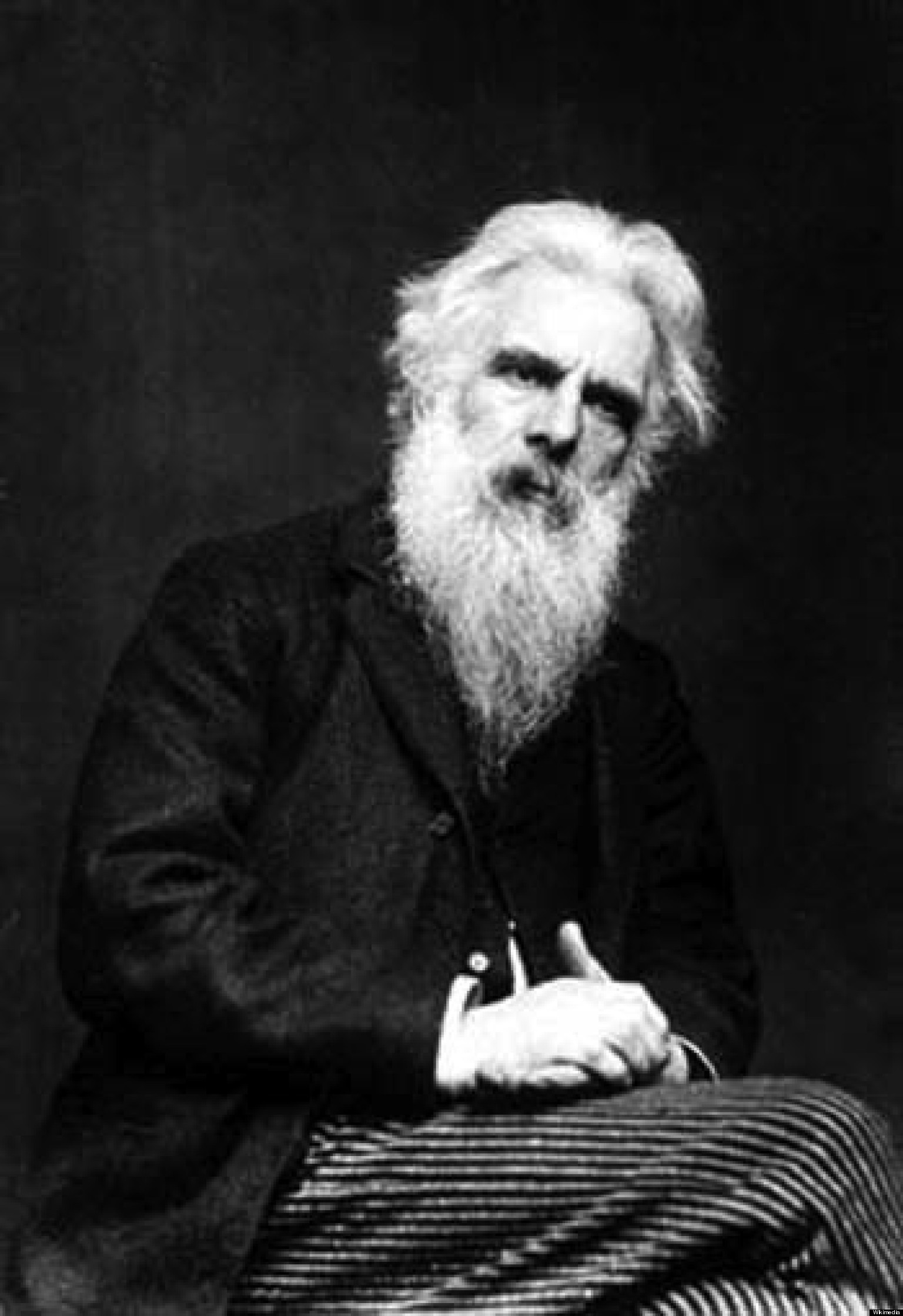 In 1872, Leland Stanford, former governor of California and major investor in the Central Pacific Railway, sent a telegram to Eadweard Muybridge asking him to help settle a bet. Popular belief held that a galloping horse always had at least one hoof to the dirt at any given time. Centuries of painting and sculpture—the only frozen depiction of horses in motion to that point—had either shown horses always in contact with the ground, or comically splayed out like a rocking horse. A growing group of scientifically-minded horsemen—one of them Stanford—suspected there was more to a running horse than met the eye, but lacked any concrete proof that they ever fully left the ground and flew.

Stanford loved everything about horses, especially racehorses. His Palo Alto Stock Farm, located on the grounds of what is now Stanford University, housed nearly 8,000 acres for the many standardbreds he and his estate bred, trained, and raced (mostly as trotters) on the California circuit. He had become obsessed with equine anatomy and the way horses moved, enlisting Muybridge to capture his horses in flight.

Initially, Muybridge declined, explaining that such a thing couldn’t be done. Cameras had not been around very long by the 1870s, and no camera yet had a shutter speed faster than the photographer could remove and replace a lens cap. Long exposure lent itself to static scenes such as landscapes and stationary portraits but certainly not to galloping horses.

However, Muybridge devised the first “automatic” camera shutter during his Stanford experiments, employing it at a San Francisco racetrack to make the first photograph of a running horse (Stanford’s trotter, Occident) in history. Although the photograph was ultimately too blurry, it was a promising first step. By 1878, Muybridge and Stanford had assembled the apparatus that would ensure Muybridge’s place in history. At Stanford’s Palo Alto Stock Farm, they built the “camera shed,” a structure/darkroom built alongside a race chute. The shed could accommodate up to 24 cameras along the trackside wall, all designed to incorporate Muybridge’s landmark electric shutter, which Stanford’s Central Pacific Railway engineers had rigged to trip wires strung across the track at intervals of 21 inches. 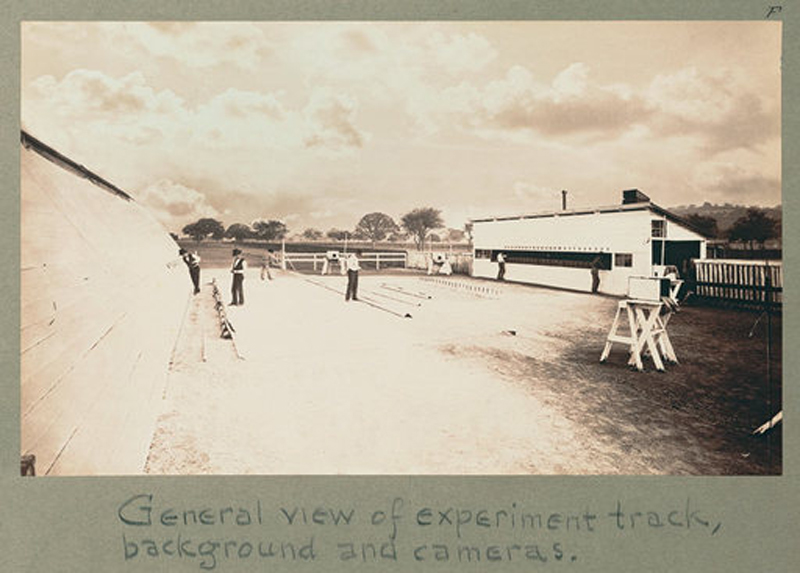 Their hope was that a galloping horse would activate the circuit in each camera by releasing each successive trip wire along the path, creating a series of photographs that could freeze each small increments of time onto a photographic plate. The result was something like a flip book, or stop-motion animation, which showed each stage of motion in a grid of images. Muybridge could then piece everything back together into a continuous, “moving” image. It was a revolutionary accomplishment, and is considered one of the first steps made toward modern filmmaking. 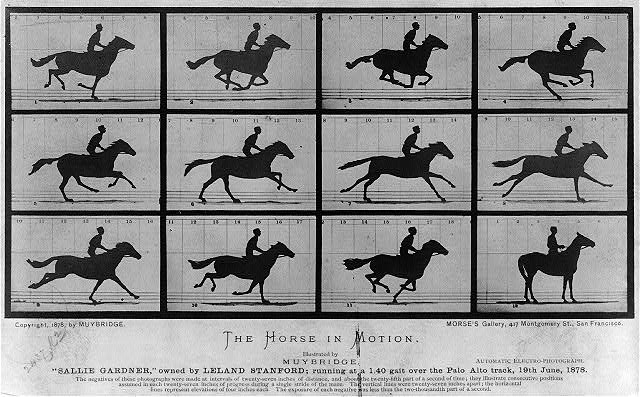 Horse in motion images from the Library of Congress

Muybridge and Stanford floored scientists, artists, and regular Joes, alike. They published a compendium of their moving pictures, but Muybridge also took the show on the road with his newly-created zoopraxiscope, essentially a projector that enabled him to “play” his photographic series of animals (he moved on to many other mammals, including people) running, jumping, dancing, boxing, eating, etc. They called it “the poetry of motion.” 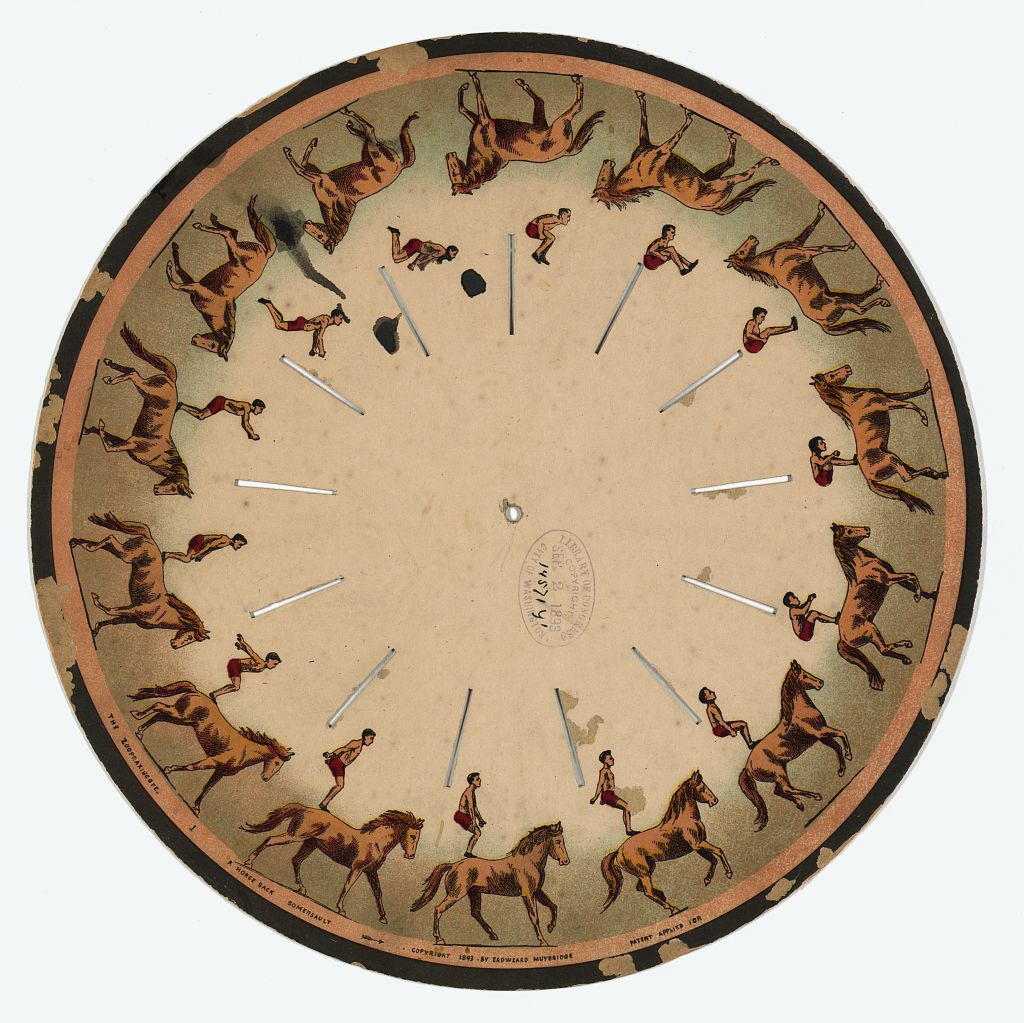 Round zoopraxiscope reels. Check out this example of what Victorian audiences would have seen projected on the wall during a Muybridge demonstration.

While the grids of photographs depicting the moving animals were convincing to most, the zoopraxiscope had its critics. In order to transfer the images onto the reel that would be spun and projected on the wall, Muybridge painted copies of what the camera captured to reduce distortion and make the moving image more convincing. Some critics believed this was cheating, leaving plenty of room for Muybridge to doctor his images before stringing them back into a sequence. Nevertheless, Muybridge had captured the imaginations of many painters, scientists, filmmakers, and horsemen and women for years to come.

You’ve been very patient since my question at the beginning of this blog, so here are some takeaways:

1. The exact moment Muybridge and Stanford were trying to capture—when all four hooves of a horse have left the ground during a single stride—is called the transverse gallop. These split seconds of time are what enable horses to move so quickly. The less resistance to an object (the ground), the quicker a heavy mass moves through the air (the muscular horse, essentially flying through the air for a split second). Secretariat occasionally had TWO transverse gallops per stride, due to his prime musculature and circulation, which is part of what made him so fast.

2. The famous sequences in The Matrix trilogy, where characters dodge bullets and hang in midair as the camera swings around them, is a technique directly descended from Eadweard Muybridge’s photography technique. The cinematographers of the sci-fi blockbuster employed a sequence of cameras to capture all angles of objects, editing them back together later within the larger scene. It’s popularly called “time slicing,” an appropriate homage to Muybridge’s invention.

3. Watching a Muybridge moving image is startlingly like watching a modern GIF. Watch the link above, then load up your favorite GIF and blow your mind.

4. Edgar Degas studied Muybridge’s photographs of animals and people in motion, even sketching and modeling directly from Muybridge series on occasion. Marcel Duchamp’s Nude Descending a Staircase is considered a tribute to Muybridge’s innovations, as are Any Warhol’s compositional “grids” of images.