Dozens of visitors to the museum signed a banner to wish MINE THAT BIRD luck in Saturday’s upcoming Preakness Race. The second leg of the Triple Crown is eagerly awaited by fans each year with more than a 30 year streak without a winner. (The last Triple Crown Winner was Affirmed in 1978.) Museum guests also enjoyed the first glimpses of the new “Capture the Moment” exhibit with life-size photographic panels depicting this year’s historic victory with MINE THAT BIRD and jockey Calvin Borel. Other upcoming exhibit changes to document this year’s win include the changing of the silks and horse in the winner’s circle, updated stretch run in the feature film “The Greatest Race” and addition of this year’s race to the Time Machine videos on the first floor of the museum. These changes are expected to be complete by June 3rd.

KENTUCKY DERBY WINNER MINE THAT BIRD HEADS TO PIMLICO – A few minutes after 9 o’clock Tuesday morning, Double Eagle Ranch and Buena Suerte Equine’s Mine That Bird rolled out of the Churchill Downs barn area headed for Baltimore and the second leg of racing’s Triple Crown.

With trainer Bennie “Chip” Woolley behind the wheel of the Ford F-450 Lariat and exercise rider Charlie Figueroa riding shotgun, the Kentucky Derby-winning team left Barn 42 with Mine That Bird comfortably ensconced in the trailer behind the truck.

“I think he is ready,” Woolley said. “If we make the trip up there good and he eats good, I couldn’t ask for anything better.”

Woolley arrived pulling the trailer at 6 a.m. and began the process of loading everything for the 10-hour trip to Pimlico. Mine That Bird, who had worked a half-mile in :49.20 on Monday morning, walked the shedrow for 20 minutes and grazed behind the barn for another 15 minutes before returning to his stall for 10 minutes before loading on the trailer at 9 o’clock.

The only stops Woolley planned to make was the occasional restroom break and to grab a bite to eat.

“I have about 115 gallons and hauling the trailer I get about 8 ∏ miles a gallon,” Woolley said. “This will be about like our first day coming here when we went from El Paso on Lone Star Park (in suburban Dallas). We won’t need to stop for gas. When we stop to eat, I’ll open the top of the window and let him look out and take things in. He’s a good shipper. Nothing bothers him.”

Woolley was eager for the trip to begin.

“It’s getting exciting; things are starting to build and I am eager to run again,” Woolley said. “I came here as the underdog with no pressure. Things have changed slightly.”

Before Mine That Bird walked into the trailer, Bob Baffert, astride his stable pony Leo, rode up from Barn 33 where his Kentucky Derby runner-up Pioneerof the Nile is housed.

“I just want to see how this is done,” Baffert said with a laugh.

The two trainers shook hands, wished each other luck and then it was time to go.

With Baffert running interference on Leo, Woolley pulled in right behind and had a clear shot to Gate 6 and the open road east.

Other Preakness Hopefuls on the move-

Kentucky Oaks (Grade I) winner and Preakness possible starter Rachel Alexandra was on the track at 6:20 a.m. Tuesday, going once around with exercise rider Dominic Terry up. Rachel Alexandra had worked a half-mile in :48.40 on Sunday and walked Monday.

Getting a jump on the migration east to Baltimore was owner/trainer Tom McCarthy’s General Quarters as well as five horses trained by D. Wayne Lukas including Preakness hopefuls Flying Private, owned by Robert Baker and William Mack, and Luv Gov, owned by the Marylou Whitney Stable. All were gone before the track opened for training at 6 o’clock. 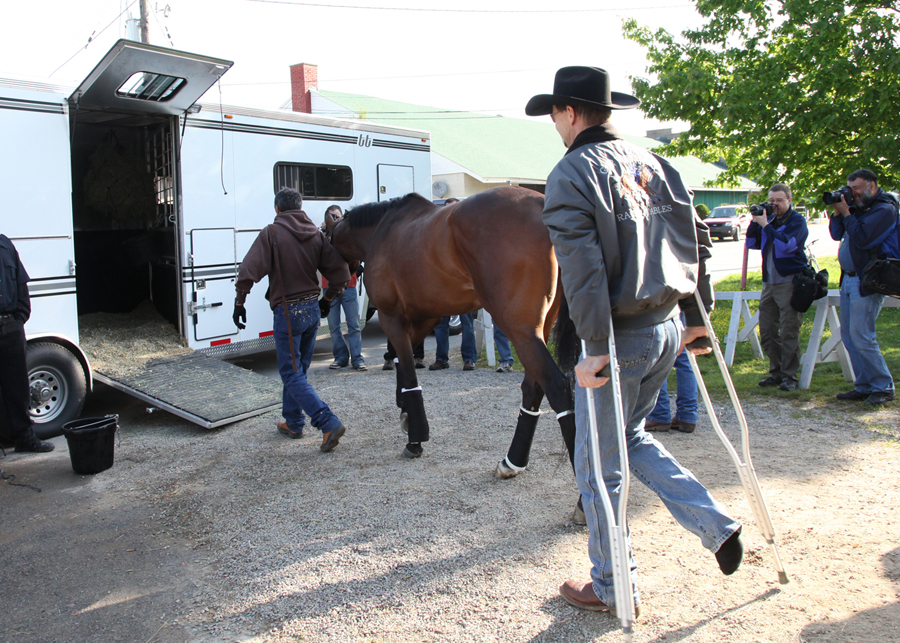 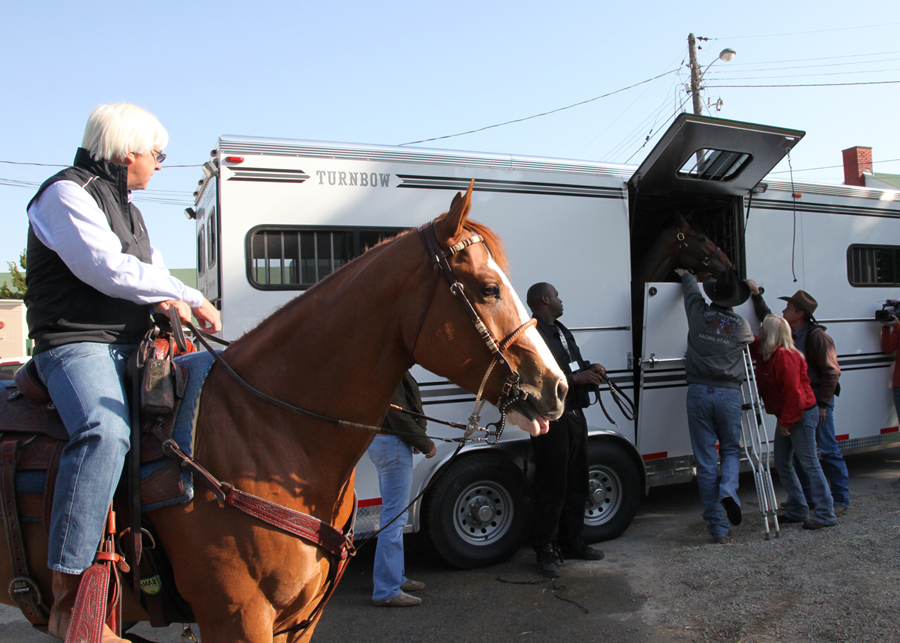