What a great month. I had a string of amazing school visits complimented by almost perfect weather. Here are just a few highlights.

October 3rd took me to Paint Lick, Kentucky. Ronnie told me that it was pretty small. Here is downtown.

Four buildings on the left and four buildings on the right. According to the historical plaque, it was named for the Indian markings on trees discovered by the first settlers that encroached on the territory. Paint Lick Elementary, a Blue Ribbon School, was built 3 miles outside of town. The students were very well behaved. I didn’t realize it was the last day before their fall break until a teacher had mentioned it.

During the Odds in Everyday Life program for the older kids, the 4th grade had to leave early for their lunch. At the end, I always call up “7 super rich horse owners with really awesome horse names.” (It’s almost a guarantee there will be a Bob or Spongebob Derby horse.) On the way out of the gym, a boy runs up and says, “Miss Heather! Miss Heather! You should have picked me. I would have named my horse David Hasselhoof.” And I started cracking up! BRILLIANT. These students have definitely earned their Blue Ribbon. I chuckled the entire two hour drive back to Louisville. “…Hasselhoof.” I wish I would have thought of that.

Lunch Buddies. The next morning, I braved the patches of fog along the Bert T. Combs Mountain Parkway to head over to Bowen Elementary in Powell County. Since the Kindergarten and 1st grade had a field trip scheduled that day, I spoke to grades 2-5. The teachers requested three programs for grades 4 & 5 and two programs to grades 2 & 3. I was a little apprehensive. I don’t mind doing two programs for a grade level, but three may be pushing it with trying to keep their attention. (I was somewhat nervous too. If I didn’t hook the kids in the beginning, it’d be three agonizing programs of begging for volunteers.)

Not only did we get off to a great start, I kept their attention and participation through each lesson. The school offered me lunch, so of course I accepted. Smiley face hashbrowns? Yes, please. As I was walking out of the cafeteria, a group of 2nd graders cleared a spot at their table and started yelling, “Miss Heather!!” So I sat down and had lunch with them. They told me about their horses and siblings. It was a good time. 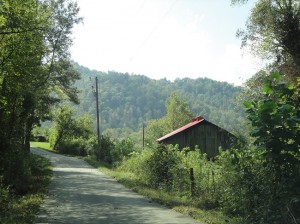 On the way home (since the fog had cleared and I could finally see my surroundings), I realized I was in the Red River Gorge, home of Kentucky’s Natural Bridge.

A nice scenic drive to unwind after a rousing day of Outreach.

Ballard County. I was able to book a school in one of our target counties along the far western edge of the state on the 18th. I was really surprised at how much Derby knowledge these kids had. Especially since they lived in one of the farthest counties away from Louisville. I taught 3 programs at Ballard County Elementary. Each time, more teachers joined to watch the presentations. After Science on the Track (4th Grade), they brought in a camera and asked if the student volunteers and I could re-enact the Weathering Process since it is on K-Prep (Kentucky’s State Standards Test). They recorded it to use in the classroom. I was pretty excited.

After that, I decided to get some lunch. I stopped at a roadside BBQ stand. (Western KY is known as ‘Cue Country, and I take every opportunity I come across in the land of BBQ.) After ordering, I turned around to see this massive thing in the distance and had to figure it out. The structure ended up being a 90 ft. cross high on a bluff overlooking where the Ohio and Mississippi Rivers converge. That's Cairo, Illinois off in the distance. 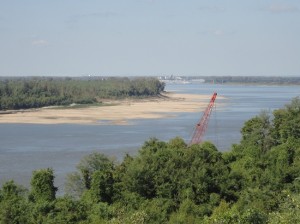 Not a bad spot to have lunch. Then it was back on the Western Kentucky Parkway to make the 4 hour voyage home.

Morgantown Elementary. Ah yes, Morgantown, Kentucky. The catfish capital of the world (according to the city’s welcome sign). I was able to work that into my Economics and the Derby program. The kids LOVED it.

Ohio County Middle School. We visit the 8th grade each year. Last February, I was still learning the programs so Ronnie taught the most of the lessons. This year, I was on my own, but I wasn’t worried. These kids are great.

Ohio County Middle School placed 6th on the regions K-Prep scores. We had a great time during Q&A. They were full of questions.

The last week of October was off limits for travel. The National FFA Convention was coming to Louisville and it was Derby Mode in the Museum- all hands on deck. A string of 15 hour days, ghost tours after dark and a sea of blue coats everywhere you looked. From Wednesday to Friday alone that week, we welcomed around 18,000 guests through our Museum doors.

I visited almost 3,700 Kentucky students in October. If you would like to add FFA kids into that (granted most weren’t from Kentucky), it would bring the grand total to 22,604, which equates to seeing 729.16 students each day. Not bad.