Ashland, Kentucky is a long way from Louisville - three hours east on I-64.  My first program teaching ratios and probability to 60 sixth graders is scheduled for 8:30.  I'm out of bed by 4:45 a.m. and on the road by 5:15, stopping for coffee at 5:17.  I roll into the parking lot of Crabbe Elementary in downtown Ashland at 8:10 with the feeling that this is going to be a good outreach trip.  Just a feeling.

I taught 7 programs, traveling from classroom to classroom throughout the day.  These kids were prepared too - every class (even the kindergarteners) knew Animal Kingdom was the Derby winner on Saturday.  The fourth graders were especially impressive - they knew everything Derby related.  They knew more than me!

They even called me out on a mistake that I have been making for at least the last year.  Here it is: There are 7 official colors a thoroughbred can be.... here is the breakdown of Derby winners:

Which is impossible since there have been 137 Derby winners and this list equals 139.  Jennifer Campbell, a fourth grader raised her hand and informed me of this.  OH NO!!!   So I'm in my office now and I'm going to look in the official Churchill Downs Media Guide to see where I've been steered wrong.

I walked out of Crabbe Elementary at 2:45 tired, but happy.  It was a really good day.  But as I drove to my hotel I noticed the clouds starting to build in the west.  By the time I drove to dinner at 6:00 and two thunderstorms later, downtown Ashland was flooded.  I did a U-turn (along with everyone else), stopped and got a carry out pizza, headed back to hotel, luckily on high ground. 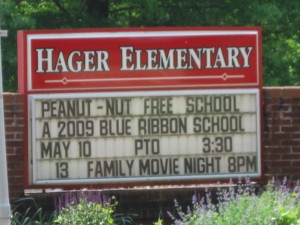 The next day it was back to downtown Ashland and a visit to Hager Elementary.  I taught four programs and received maybe the greatest compliment I've ever had.  As the first graders were leaving the gym, I heard one little girl tell her friend - "that guy really knows what he's talking about"....a great endorsement.  At 12:15 I loaded the van and it was back the way I came - I-64, listening to the Reds as I made my way back home to Indiana.  It's my last trip of the year until September when another school year will be under way.  Maybe by then we'll have a Triple Crown winner to talk about!   That'd be fun!